This gives a total of 4.40% delinquent or in foreclosure.

Today, the Data & Analytics division of Black Knight, Inc. released its latest Mortgage Monitor Report, based upon the company’s industry-leading mortgage, real estate and public records datasets. With full Q2 data in and analyzed, this month’s report looks at incredible growth in the nation’s levels of tappable equity – the amount available for homeowners with mortgages to borrow against while still retaining at least 20% equity in their homes. According to Black Knight Data & Analytics President Ben Graboske, continued heat in the housing market drove tappable equity levels to never-before-seen heights in the second quarter of 2021.

“Tappable equity grew an astonishing 37% year-over-year in Q2 2021, driven by increasing gains in home values over the quarter,” said Graboske. “According to our Black Knight HPI, as of the end of June, home values had risen nearly 20% from the year before and 7.4% in Q2 alone. As a result, already at a record high of $8.1 trillion at the end of Q1, U.S. homeowners with mortgages gained another $1 trillion in tappable equity in the second quarter alone. This is by far the strongest growth we’ve ever seen and equates to some $173,000 in equity available to the average mortgage holder, a $20,000 increase in just three months.

“A rising tide lifts all boats as they say, including homeowners in forbearance – whose ability to return to making payments when forbearance ends will likely be a key driver in the nation’s overall COVID-19 economic recovery. Some 98% of homeowners in forbearance now have at least 10% equity in their homes. Even when we add in 18 months of forborne payments – including principal, interest, taxes and insurance – the share with less than 10% equity only climbs to 7%, about 135,000 homeowners. This is a drastically different dynamic than during the worst of the Great Recession, when more than 40% of all mortgage holders had less than 10% equity and 28% were fully underwater. Such strong equity positions should help limit the volume of distressed inflow into the real estate market as well as provide strong incentive for homeowners to return to making mortgage payments – even if needing to be reduced through modification.”
emphasis added 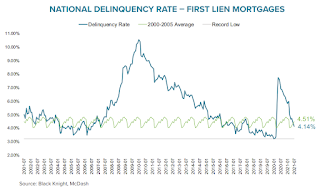 • The national delinquency rate saw a 5% reduction in July, and at 4.14% is within a single percentage point of its pre-pandemic level

• While overall delinquency volumes continue to edge closer to pre-pandemic levels, some 1.45 million borrowers remained 90 or more days past due – but not yet in foreclosure – at the end of July 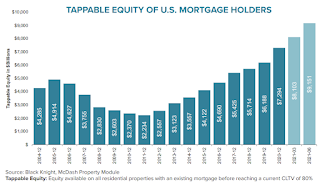 And on tappable equity from Black Knight:

• Tappable equity – the amount available for homeowners with mortgages to borrow against while still retaining at least 20% equity in their homes – was already at a record high of $8.1T at the end of Q1

• According to our Black Knight HPI, as of the end of June, home values had risen nearly 20% from the year before and 7.4% in Q2 alone

• As a result, U.S. homeowners with mortgages gained another $1T in tappable equity in Q2 alone to make an astonishing 37% year-over-year gain
…
• The 1.1M cash-outs originated in Q2 were the largest quarterly volume in nearly 15 years, with more than $63B in equity withdrawn in the quarter – the most since mid-2007

This is Why Esports is Seeing a Massive Uptick in Investments