Note: The year-over-year occupancy comparisons are easy, since occupancy declined sharply at the onset of the pandemic.

The gain in occupancy was helped by weekly group demand eclipsing 1 million for the first time since the earliest days of the pandemic. More group demand created a lowering effect on ADR, as group rooms for upper-tier classes are typically priced lower than transient rooms.
emphasis added 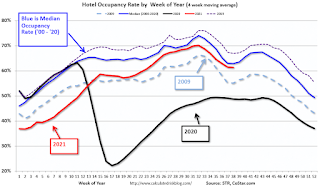 Note: Y-axis doesn’t start at zero to better show the seasonal change.
With solid leisure travel, the Summer months had decent occupancy – but it is uncertain what will happen in the Fall with business travel – usually weekly occupancy increases to around 70% in the weeks following Labor Day due to renewed business travel.
previous post