Based on publicly-available local realtor/MLS reports released across the country through today, I project that existing home sales as estimated by the National Association of Realtors ran at a seasonally adjusted annual rate of 6.2 million in September, up 5.4% from August’s preliminary pace but down 3.7% from last September’s seasonally adjusted pace

Local realtor reports, as well as reports from national inventory trackers, suggest that the YOY % decline in the inventory of existing homes for sale last month was similar to that in August. 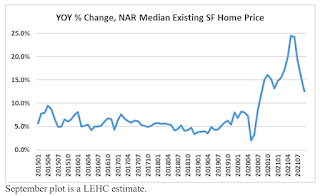 CR Note: The National Association of Realtors (NAR) is scheduled to release September existing home sales on Thursday, October 21, 2021 at 10:00 AM ET. The consensus is for 6.06 million SAAR.