The BEA released the Personal Income and Outlays, October 2021 report: 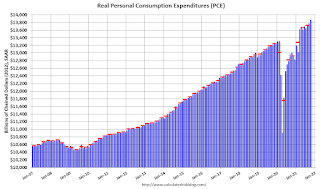