Mortgage applications decreased 7.1 percent from one week earlier, according to data from the Mortgage Bankers Association’s (MBA) Weekly Mortgage Applications Survey for the week ending January 21, 2022.

“All mortgage rates in MBA’s survey continued to climb, with the 30-year fixed rate rising for the fifth consecutive week to its highest level since March 2020. The 30-year fixed rate is now 77 basis points higher than it was a year ago,” said Joel Kan, MBA’s Associate Vice President of Economic and Industry Forecasting. “Unsurprisingly, borrower demand for refinances subsided, with applications falling for the fourth straight week. After almost two years of lower rates, there are not many borrowers left who have an incentive to refinance. Of those who are still in the market for a refinance, these higher rates are proving much less attractive to them.”

Added Kan, “The decline in purchase activity was led by a 5 percent drop in government applications, compared to a modest less than one percent decline in conventional applications. The relative weakness in government purchase activity continues to contribute to higher loan sizes. The average purchase loan size was $433,500, eclipsing the previous record of $418,500 set two weeks ago.”
…
The average contract interest rate for 30-year fixed-rate mortgages with conforming loan balances ($647,200 or less) increased to 3.72 percent from 3.64 percent, with points decreasing to 0.43 from 0.45 (including the origination fee) for 80 percent loan-to-value ratio (LTV) loans.
emphasis added 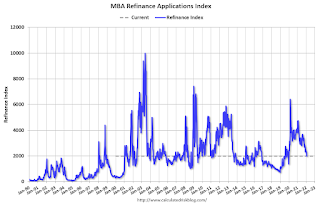 With higher mortgage rates, the refinance index has declined sharply. 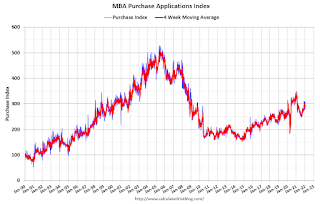 According to the MBA, purchase activity is down 11% year-over-year unadjusted.

Futures Boom Ahead of BoC Announcement

Some Investors Are Sitting On Massive Losses

Is USDT The Next Stablecoin To Blow Up?

Bond ETFs Back In Favour

Humacyte downgraded to Underweight from Overweight at Piper Sandler