On Monday I wrote an article for TheStreet.com about the psychology of the Bitcoin craze. Since that article it had rallied another 50% into early trading on Friday. According to Bitcoincharts.com the price is at $1213 as I write this post.

Part of the equation for the currency is that it is not inflationary which is supposed to be in contrast to central banks which are inflationary by the nature of their policies. The chart captures the price action and I took the screenshot where the cursor hovered over a time from early in the year when the price was below $25.

Although Bitcoin is intended to be a currency, this sort of volatility hurts the chances that it can be widely adopted at some point (I realize some are using it for transactions). This is not to say Bitcoin should not exist, people should be able to speculate on whatever they want to and own the consequences good or bad but a vehicle for speculation (up 50% in a couple of days) makes for a poor choice for a currency.

Typically when a chart goes vertical as the Bitcoin chart has it comes back down almost as fast (check out Andrea Electronics and Comparator Systems). If you can point to an instance where something went vertical and did not subsequently crash, please leave a comment with the particulars.

If it turns out that years of ZIRP and QE have distorted markets leading to some horrible consequence then things like the mania with Bitcoin will be looked back at and with full conviction of hindsight bias we will regularly hear things like “we knew Bitcoin was a warning.”

In past posts I have noted that the equity markets have defied consequence and maybe there will never be a consequence from the last few years but the divergence of the S&P 500’s fortunes and Main Street’s fortunes should at least increase your index of suspicion. 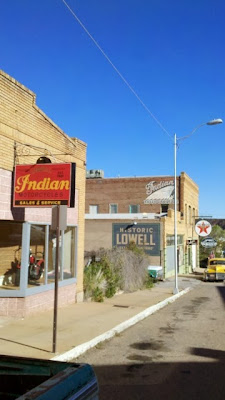 The picture is from the ghost town of Lowell in Bisbee, AZ.

What Caused A Surge In Ethereum Shares

What Got Twitter’s Shares To Appreciate By 58%

Whistling Past The Graveyard