From the Fed: Industrial production and Capacity Utilization

Industrial production rose 0.6 percent in May after having declined 0.3 percent in April. The decrease in April was previously reported to have been 0.6 percent. Manufacturing output increased 0.6 percent in May after having moved down 0.1 percent in the previous month. In May, the output of mines gained 1.3 percent and the production of utilities decreased 0.8 percent. At 103.7 percent of its 2007 average, total industrial production in May was 4.3 percent above its level of a year earlier. The capacity utilization rate for total industry increased 0.2 percentage point in May to 79.1 percent, a rate that is 1.0 percentage point below its long-run (1972–2013) average.
emphasis added 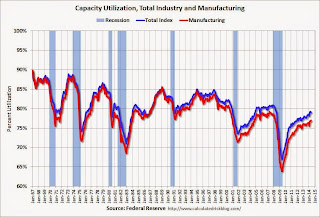 This graph shows Capacity Utilization. This series is up 12.2 percentage points from the record low set in June 2009 (the series starts in 1967). 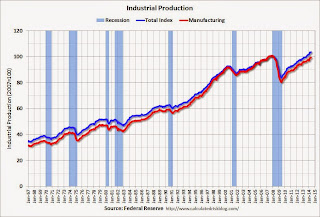 The monthly change for both Industrial Production and Capacity Utilization were above expectations – and April was revised up.

Let’s Slow It Down

Only The Paranoid Survive