The multi-day Brexit gold surge back in June was the biggest upward move since 2008 with gold rallying  4.5% the day after the vote. Yesterday, gold had its biggest one-day rally since, rising 1.6%.

This came on the back of Goldman Sachs revising its September rate hike odds down to 40% from its previous 55% prediction just a few days earlier, and the release of deteriorating manufacturing numbers.

This diminishing likelihood of a Federal Reserve rate hike has caused the dollar to fall to more than a one-week low against the Japanese yen and the euro.

As we’ve posted here, numerous big-name billionaires, or in the case of Jacob Rothschild, a trillionaire, have been moving significant portions of their holdings into the yellow metal over the summer.

Lord Rothschild has increased his gold position while simultaneously decreasing his US dollar holdings by around 6%.

His timing is interesting given that the biggest shake-up in the world currency market in decades is set to happen on October 1st, the day before the end of the Jubilee Year, with the Chinese yuan being added into the IMF’s SDR basket.

Rothschild recently said, in his  semi-annual address to shareholders of RIT Capital Partners , “It is impossible to predict the unintended consequences of very low interest rates.”

He acts as though the consequences of low interest rates are unintentional, but artificially suppressed rates are deliberately being used to expand the money supply, keep bankrupt governments operating and are, in effect,  siphoning wealth away from citizens through the hidden tax of price inflation.

The notional value of the Dow Jones has increased, but if you look at the Dow/Gold ratio, you’ll notice a much starker image.  The Dow, in gold terms, is down significantly since the start of the year. 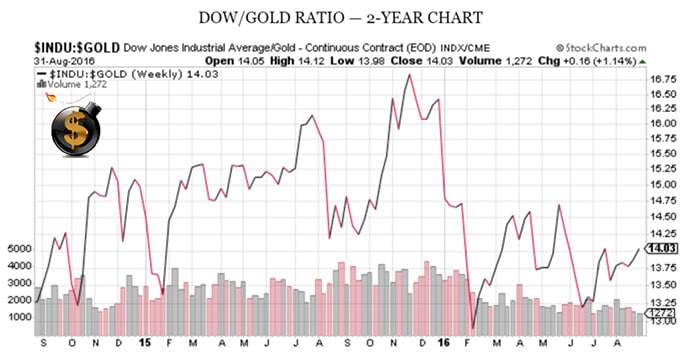 The case for gold was made even stronger in Jackson Hole last week after Janet Yellen hinted that the Federal Reserve may follow in the footsteps of the Bank of Japan and the European Central Bank by purchasing assets including equities directly in the marketplace. She suggested that future policy makers explore purchasing “a broader range of assets”.

At the same conference,  Christopher Sims of Princeton University said, “It may take a massive QE program, large enough even to shock taxpayers into a different, inflationary view of the future,” to prevent an all-out collapse.

So, we now have billionaires, trillionaires, academia and the Federal Reserve all stating that we are in uncharted waters and that anything can possibly happen.

If you don’t want to be “shocked into a different, inflationary view of the future” and want to hear more about what is going on with precious metals, watch our most recent interview with Colin Kettell of Palisade Radio, who is very knowledgeable about the space.

You can watch the full interview here:

In a world where most tax slaves don’t own gold, and retirement accounts are low hanging fruit for greedy governments to seize, many people are likely to get hurt. In fact, it’s been said that  those who lose the least in the upcoming crash will do the best. Physical gold and related securities are the best insurance.  Even gold-backed or self directed IRAs are much safer than some of their alternatives.

As we mentioned in the video above, we have had amazing success over the past year, with some of our speculative picks up over 1,000% and our overall portfolio up 200%. If you want to join thousands of others who receive up-to-date information about these sorts of investments and who have prospered tremendously, you can get more information on the TDV newsletter here.

Originally Appeared At The Dollar Vigilante

EIA: “The average pump price for December is on track to be the lowest for the month in eight years”

A Political Hurricane is About to Sweep Across Europe