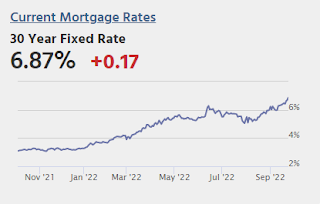 The most recent historical high water market for mortgage rates was “14 years.” It was broken so many times in September that we officially declared it to be boring last Tuesday. Now, less than a week later, 14-year highs would be more exciting than boring. As of mid-day today, we’re officially at 20 year highs. [30 year fixed 6.87%]
emphasis added

Tuesday:
• At 8:30 AM ET, Durable Goods Orders for August from the Census Bureau. The consensus is for a 0.1% decrease in durable goods orders.

• Also at 9:00 AM, FHFA House Price Index for July. This was originally a GSE only repeat sales, however there is also an expanded index.

On COVID (focus on hospitalizations and deaths): 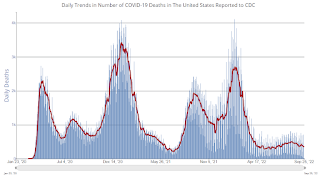 This graph shows the daily (columns) and 7-day average (line) of deaths reported.