The Chicago Fed released the national activity index (a composite index of other indicators): Economic Activity Slower in October

Led by declines in production-related indicators, the Chicago Fed National Activity Index (CFNAI) decreased to –0.56 in October from 0.00 in September. All four broad categories of indicators that make up the index decreased from September, and only two made positive contributions to the index in October. 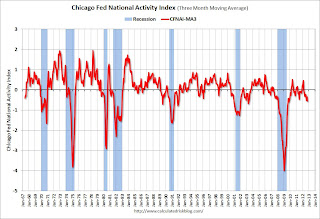 This suggests economic activity slowed, and growth was still below trend in October.

According to the Chicago Fed:

What is the National Activity Index? The index is a weighted average of 85
indicators of national economic activity drawn from four broad categories of data: 1) production and income; 2) employment, unemployment, and hours; 3) personal consumption and housing; and 4) sales, orders, and inventories.