Once again we are nearing a political event horizon that could significantly impact the economy – and we can’t see beyond the horizon. My baseline assumption is an agreement will be reached, probably during the first few weeks of January, and the agreement will mean Federal fiscal drag next year at about the level of the CBO’s alternative fiscal scenario. This would suggest modest GDP and employment growth next year, although probably better than in 2012.
Note: There is no clear drop dead date for the “fiscal cliff”. Nothing horrible happens on January 1st, but the longer it takes to reach an agreement next year, the larger the negative impact on the economy.
With that assumption, there are two key drivers for additional growth next year. The first is residential investment (construction employment lags investment with a lag, so construction employment should pick up in 2013), and the second is the end of the state and local drag. I’ve discussed both of these before – see: Two Reasons to expect Economic Growth to Increase – but I think this is worth repeating.
Over the last 3+ years, state and local governments have lost over 700 thousand payroll jobs (including the preliminary estimate of the benchmark revision) and it appears these layoffs are coming to an end. I don’t expect state and local government to add much to economic and employment growth next year, but just stopping the drag will help.
This graph shows the contribution to percent change in GDP for residential investment and state and local governments since 2005. 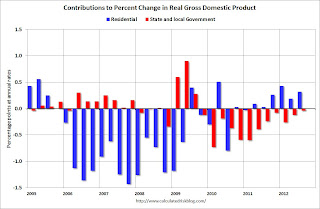 Click on graph for larger image.
The blue bars are for residential investment (RI), and RI was a significant drag on GDP for several years. Now RI has added to GDP growth for the last 6 quarters (through Q3 2012).
However the drag from state and local governments is ongoing, although the drag in Q3 was small. State and local governments have been a drag on GDP for twelve consecutive quarters. Although not as large a negative as the worst of the housing bust (and much smaller spillover effects), this decline has been relentless and unprecedented. The good news is the drag appears to be ending.

Yesterday, the Rockefeller Institute put out an update on state government revenues: State Tax Revenues Showed Continued Yet Slow Growth in the Third Quarter of 2012

Revenues are not increasing sharply, but they are increasing enough to probably stop most of the layoffs.
And from the NY Times: As State Budgets Rebound, Federal Cuts Could Pose Danger

A fiscal survey of states released Friday by the National Governors Association and the National Association of State Budget Officers found that states expect to collect $692.8 billion in general fund revenues this fiscal year, which is more than they collected in 2008, the last fiscal year before the recession.
That is good news, but perhaps not as good as it initially appears. Adjusted for inflation, this year’s revenues are still expected to be 7.9 percent below the 2008 levels.
“What we’re really seeing here is there is not enough money to make up for any federal cuts,” said Scott D. Pattison, the executive director of the state budget officers’ association. “What I’ve heard from the state budget people is that they’ve told departments and agencies in state government: Do not expect us to have the money available, even if we wanted to, to make up for federal cuts.”

So there are some reasons for a little optimism, but it is difficult to make projections without knowing the budget agreement.