Earlier I posted some questions for next year: Ten Economic Questions for 2013. I’ll try to add some thoughts, and maybe some predictions for each question.
Note: Here is a review of my 2012 Forecasts
9) Residential Investment: Residential investment (RI) picked up in 2012, with new home sales and housing starts increasing 20% or so.  Note: RI is mostly investment in new single family structures, multifamily structures, home improvement and commissions on existing home sales. This still leaves RI at a historical low level. How much will RI increase in 2013?
First a graph of RI as a percent of Gross Domestic Product (GDP) through Q3 2012. 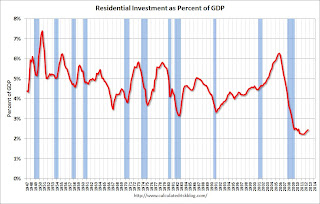 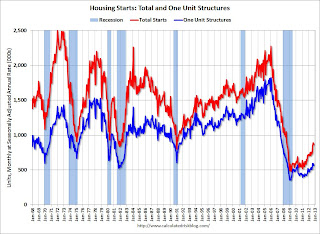 The second graph shows total and single family housing starts through November 2012.
Housing starts are on pace to increase about 25% in 2012. And even after the sharp increase last year, the approximately 770 thousand housing starts in 2012 will still be the 4th lowest on an annual basis since the Census Bureau started tracking starts in 1959 (the three lowest years were 2009 through 2011).
Here is a table showing housing starts over the last few years. No one should expect an increase to 2005 levels, however demographics and household formation suggest starts will return to close to the 1.5 million per year average from 1959 through 2000. That means starts will come close to doubling over the next few years from the 2012 level. 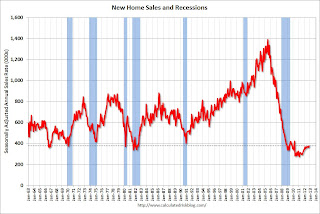 The third graph shows New Home Sales since 1963 through November 2012. The dashed line is the current sales rate.
Just like for RI as a percent of GDP, and housing starts, new home sales were up in 2012, but are still near the low historically.
New home sales will still be competing with distressed sales (short sales and foreclosures) in many areas in 2013 – and probably even more foreclosures in some judicial states. Also I’ve heard some builders might be land constrained in 2013 (not enough finished lots in the pipeline). Both of these factors could slow the growth of residential investment, but I expect another solid year of growth.
Here are some recent forecasts for housing in 2013. I expect growth for new home sales and housing starts in the 20% to 25% range in 2013 compared to 2012. That would still make 2013 the sixth weakest year on record for housing starts (behind 2008 through 2012), and the seventh or eight weakest for new home sales. So I expect further growth in 2014 too.
Earlier:
• Question #10 for 2013: Europe and the Euro

The Problem with Macro, and An Apology