Another update on hotels from HotelNewsNow.com: STR: US results for week ending 16 March 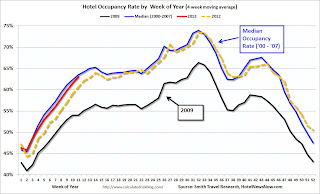 Click on graph for larger image.
The red line is for 2013, yellow is for 2012, blue is “normal” and black is for 2009 – the worst year since the Great Depression for hotels.
The occupancy rate will increase seasonal over the next few weeks and then move sideways until summer vacation travel starts. This occupancy rate has improved from the same period last year – and is close to pre-recession levels.
Data Source: Smith Travel Research, Courtesy of HotelNewsNow.com