When was the last time both houses of Congress unanimously passed a bill? It was actually very recent, when Congress repealed and castrated the Stocks Act, a law designed to curtail insider trading by politicians.

Amidst much fanfare, on April 4, 2012, President Obama signed into effect the STOCK Act. What is the Stock Act? The acronym ‘STOCK’ Act stands for:

That law was designed to provide transparency about the finances of members of Congress and senior officials, and to make sure they are not benefiting financially from their knowledge as government operatives. 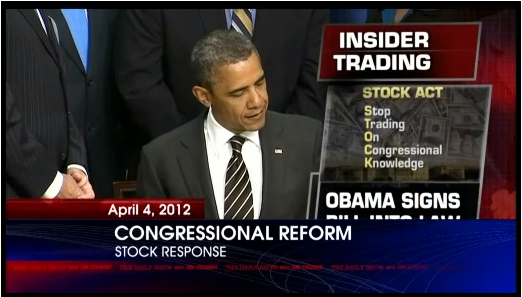 Why was the STOCK Act needed?

Insider trader is illegal for everyone but Congressmen, senior officials and their staff. Yes, they took advantage of that convenient little loophole. For example:

1) If you sit on a healthcare committee and you know that Medicare is considering not reimbursing for a certain drug, that’s market moving information. And if you can trade stock off of that information and do so legally, that’s a great profit making opportunity.

During the healthcare debate of 2009 members of Congress were trading health care stocks, including House Minority Leader John Boehner who led the opposition against the so-called public option, government funded insurance that would compete with private companies. Just days before the provision was finally killed, Boehner bought health insurance stocks, all of which went up.

2) In mid September 2008, Treasury Secretary Hank Paulson and Federal Reserve Chairman Ben Bernanke were holding closed door briefings with congressional leaders, and privately warning them that a global financial meltdown could occur within a few days. One of those attending was Alabama Representative Spencer Bachus, then the ranking Republican member on the House Financial Services Committee and now its chairman.

Literally, the next day Congressman Bachus bought puts (options that increase in value when stocks fall) based on apocalyptic briefings he had the day before from the Fed chairman and treasury secretary. While Congressman Bachus was publicly trying to keep the economy from collapsing, he was privately betting that it would.

3) When Illinois Congressman Dennis Hastert became speaker of the House in 1999, he was worth a few hundred thousand dollars. He left the job eight years later a multi-millionaire. Congressmen make about $174,000/year. How did he do it?

In 2005, Speaker Hastert got a $207 million federal earmark to build the Prairie Parkway through the cornfields near his home. Just before, Hastert had bought some of those cornfields and land adjacent to where the highway is supposed to go. Five months after this earmark went through he sold that land and made about $2 million.

4) The same good fortune befell former New Hampshire Senator Judd Gregg, who helped steer nearly $70 million dollars in government funds towards redeveloping a defunct Air Force base, which he and his brother both had a commercial interest in.

No, I Want to Continue My Insider Trading

Apparently – if you believe politicians – the planned online database that would keep track of Congressmen’s financial transactions was viewed as a national security risk by Congress.

Without much fanfare, both houses and Congress unanimously – when was the last time there was a unanimous vote in Washington – repealed and castrated the STOCK act. President Obama signed the repeal a day later.

The signing of the STOCK Act in December 2012 was showcased on TV. That faithful day President Obama vowed: “I’m very proud to sign this bill into law. I should say that our work isn’t done. There is obviously more we can do to close the deficit of trust and limit the corrosive influence of money in politics.”

That’s right Mr. President, your work was not done. The Act had to be castrated to make it palatable. The benchmark of merely “limiting the corrosive influence of money in politics” (forget about eliminate, limit is the best we can do) was obviously set too high.

Like a dog off the leash, some politicians get to revel in their newfound freedom. Since the STOCK Act was repealed, we read this (reported by the Washington Times):

Sen. Dianne Feinstein introduced legislation to route $25 billion in taxpayer money to a government agency that had just awarded her husband’s real estate firm a lucrative contract to sell foreclosed properties at compensation rates higher than the industry norms.

As it turns out, this will be the first in a series of articles about corrupt politicians and Wall Street gangsters. The next article will reveal how big banks rig multi-trillion markets.

>> Sign up for the FREE iSPYETF Newsletter to avoiding missing part II of The Shameless, Obvious & Unreported Cheating Tricks of Politicians and Wall Street.

SILVER IS COLLAPSING ONTO THE FACES OF RETARDS