“What’s the correlation between long-term treasury yield and gold price?” was an e-mail question from one of the Sober Look readers recently. The answer of course is – it depends. During periods of inflationary pressure, inflation risks tend to drive yields and gold in the same direction (bond prices and gold move in the opposite direction.) That is why historically gold was viewed as a strong hedge for traditional assets. Here is an example covering one of the periods when inflation was a major concern: 1978 – 1979 (24 months). 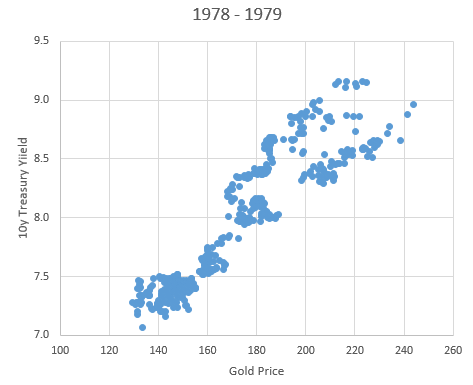 The relationship looks dramatically different over the last couple of years, with two different regimes visible over the period. The link between the two asset classes prior to April 2013 was quite weak, with no consistent correlation in their movements. But after April, the correlation between rates and gold price turned negative. 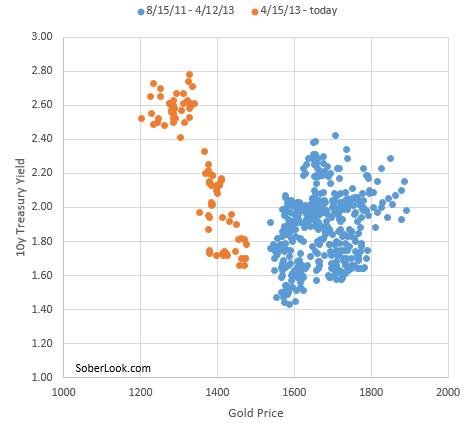 What happened in April that forced a switch to the new regime? On April 10th Goldman became bearish on gold due to (among other things) expectations of economic improvement in the US and risks of rising real rates (see Fox News story). Below is part of Goldman’s report.

GS (April 10, 2013): – Over the past month, events in Cyprus triggered a rise in Euro area risk aversion while US economic data has been disappointing. Remarkably, gold prices are unchanged over that period, although US 10-year TIPS yields are back at their lowest level since late 2012, highlighting how conviction in holding gold is quickly waning. This is particularly visible at the ETF level, with gold holdings continuing to decline quickly. Given gold’s recent lackluster price action and our economists’ expectation that the acceleration in US growth later this year to above trend pace will see US real rates move gradually higher, we have lowered our USD-denominated gold price forecast once again. Our new forecast is further below the forward curve, with year-end targets of $1,450/toz in 2013 and $1,270/toz in 2014.

Some other investors and analysts started shifting their views in that direction as well. That was the turning point. Expectations of rising real rates, driven in large part by the trajectory of the US economic recovery and subsequently the Fed’s next steps, began to move both gold and treasury prices in the same direction.