Weekly Update: One of key questions for 2013 is Will Housing inventory bottom this year?. Since this is a very important question, I’m tracking inventory weekly in 2013.
There is a clear seasonal pattern for inventory, with the low point for inventory in late December or early January, and then peaking in mid-to-late summer.
The Realtor (NAR) data is monthly and released with a lag (the most recent data was for June).  However Ben at Housing Tracker (Department of Numbers) has provided me some weekly inventory data for the last several years. This is displayed on the graph below as a percentage change from the first week of the year (to normalize the data).
In 2010 (blue), inventory increased more than the normal seasonal pattern, and finished the year up 7%. However in 2011 and 2012, there was only a small increase in inventory early in the year, followed by a sharp decline for the rest of the year. 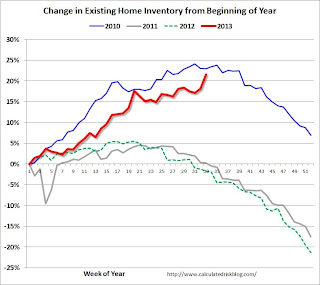 Click on graph for larger image.
Note: the data is a little weird for early 2011 (spikes down briefly).
So far in 2013, inventory is up 21.7%, and there might be some further increases over the next few weeks.  It is important to remember that inventory is still very low, and is down 5.7% from the same week last year according to Housing Tracker.
This strongly suggests inventory bottomed early this year.   I expect inventory to be up year-over-year very soon (maybe in September), and I also expect the seasonal decline to be less than usual at the end of the year.  This increase in inventory also means price increases will slow.

Jim Sinclair: This is the Last Chance You Have to Buy Gold At Anything Near These Prices!