In the middle of the earnings season, investors took their eyes away from financial statements for a bit and focused their attention on the macroeconomic picture as the US Federal Reserve and Bank of Japan held meetings last week. Even though the FOMC decided not to raise the rates further this time, it reiterated its confidence in the US economy and omitted to talk about the global outlook, which was covered in the previous meeting. Bank of Japan also maintained interest rates flat, which surprised the markets that waited for more stimulus. In addition, the US GDP data was reported on Thursday and showed that the US economy inched up by 0.5% in the first quarter, below expectations of 0.7%.

Nevertheless, when it comes to individual stocks that were in the spotlight last week, earnings remained the focus as the markets digested financial reports. According to TrackStar data, the list of the 20 most searched tickers among financial analysts last week was dominated by the tech sector, similar to the week before. TrackStar is the official newsletter of Intuition, an InvestingChannel business. This article takes a closer look at the companies in question and some developments that drew attention to them. 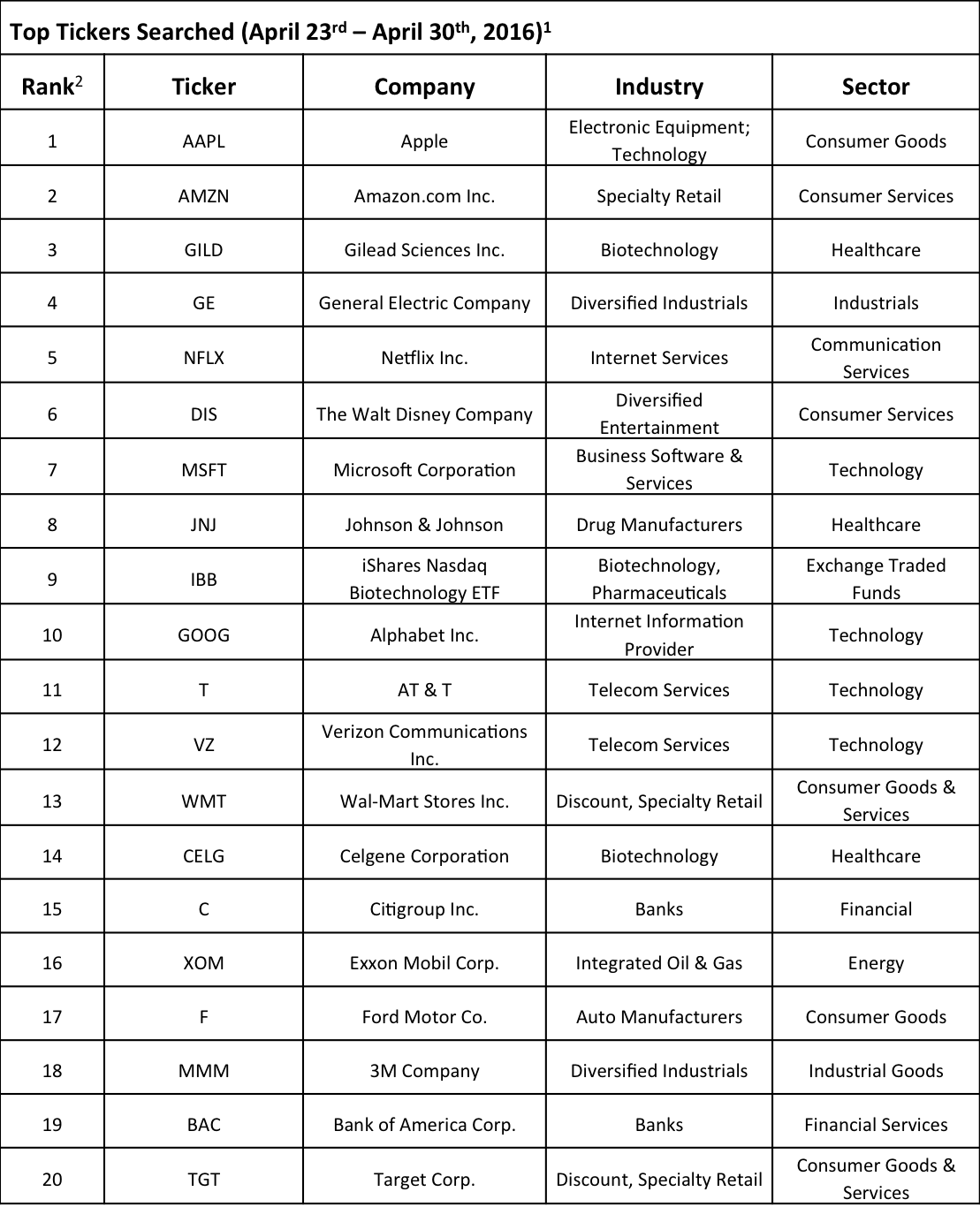 As mentioned earlier, the top was dominated by the tech sector, with Apple Inc. (NASDAQ:AAPL) and Amazon.com Inc. (NASDAQ:AMZN) ranking on the first two positions in connection with their financial results. Apple posted its fiscal second-quarter earnings on Tuesday, which included EPS of $1.90 on revenue of $50.56 billion, missing the expectations on both top- and bottom-line. IPhone sales, a crucial figure in Apple Inc. (NASDAQ:AAPL)’s financial reports, were better than expected by lower in year-on-year terms. Despite raising its capital return program and raising dividend, Apple still disappointed investors, who sent the stock in the red territory for the week following the earnings release. Another hit the stock took on Thursday, when billionaire Carl Icahn, who had been one of the biggest Apple Inc. (NASDAQ:AAPL) bulls, said in an interview that he dumped the stock due to concerns regarding Apple’s sales in China.

Amazon.com Inc. (NASDAQ:AMZN) pleasantly surprised investors on Thursday when it reported first-quarter EPS of $1.07, compared to a loss of $0.12 a year earlier and significantly above the expectations of $0.58, while revenue of $29.13 beat the expectations of $27.98 billion. The report, which also showed a 64% annual growth in Amazon Web Services revenue, showed the fourth straight profit and refuted pessimists who questioned whether Amazon.com Inc. (NASDAQ:AMZN) can maintain its profitability. On Wednesday, venture capitalist Chamath Palihapitiya pitched Amazon at the Sohn Conference, where he projected a $3.0 trillion value for the company by 2025.

Other tech companies, whose tickers ranked in the top of the most-searched last week include Netflix, Inc. (NASDAQ:NFLX), Microsoft Corporation (NASDAQ:MSFT) and Alphabet Inc (NASDAQ:GOOG), which were positioned on the 5th, 7th and 10th spots, respectively. All three companies reported their results a week earlier, but could have been in spotlight last week in connection with the reports posted by their competitors, Amazon.com Inc. (NASDAQ:AMZN) and Apple Inc. (NASDAQ:AAPL).

Gilead Sciences Inc. (NASDAQ:GILD), Johnson & Johnson (NYSE:JNJ) and Celgene Corporation (NASDAQ:CELG) were the healthcare stocks that made the list on the 3rd, 8th and 14th positions, respectively. Gilead Sciences Inc. (NASDAQ:GILD) reported its financial results on Thursday, missing on both top and bottom line and posting worse-than-expected sales of its Hepatitis C drugs. On the other hand, Celgene Corporation (NASDAQ:CELG) posted better-than-expected EPS and missed on the revenue estimates.

In connection with the earnings of Gilead Sciences Inc. (NASDAQ:GILD) and Celgene Corporation (NASDAQ:CELG), as well as Amgen (which did not appear on the list), iShares Nasdaq Biotechnology ETF (NASDAQ:IBB) ranked as the 9th most-searched ticker last week. The three companies combined amass around 24% of IBB’s weight.
The telecom sector was represented in the top-20 list by two companies, AT&T (NYSE:T) and Verizon (NYSE:VZ), which ranked on the 11th and 12th spots. From the consumer goods and services segment, the tickers that were most searched included The Walt Disney Company (NYSE:DIS) (6th), Wal-Mart Stores Inc. (NYSE:WMT) (13th), Ford Motor Co. (NYSE:F) (17th), and Target Corp. (NYSE:TGT) (20th).

Two industrial stocks that were featured among most-searched tickers for the last two weeks were General Electric Company (NYSE:GE) and 3M Company (NYSE:MMM), positioned on the 4th and 18th positions. Finally, the last quarter of the top included two financial stocks, Citigroup (NYSE:C) and Bank of America (NYSE:BAC), ranking on the 15th and 19th spots, while the only energy stock that made the list was Exxon Mobil Corp. (NYSE:XOM), which was the 16th most searched ticker.