The markets around the world were shattered last Friday following the results of the UK referendum, where a slight majority of people voted in favor of the UK leaving the European Union. Throughout this week, news outlets discussed the Brexit and its implications on the world economy. Even though many considered the referendum as an opportunity to cast a vote of protest and didn’t take into serious consideration that the UK will actually exit the EU, other governments from the union already urged London to trigger Article 50 and launch negotiations regarding the Brexit as soon as possible.

Even though Article 50 gives UK two years to finalize the exit process, the consequences were already felt on Friday, when the FTSE 100 lost over GBP 100 billion in market capitalization, and the following days when Moody’s changed the UK credit rating outlook to ‘negative’ from ‘stable’ and S&P lowered the sovereign credit rating to ‘AA’ from ‘AAA’. Markets around the world also tumbled alongside commodities, except for gold, which rallied as investors piled up into the “safe haven”. In the US, the main indices also lost a lot of ground on Friday, with Dow Jones Industrial Average losing over 300 points.

As usual, TrackStar, the official newsletter of the official newsletter of Investing Channel’s Intuition division, compiled a list of the 20 most-searched tickers among financial advisors for the last week. However, the list doesn’t show any tickers that have been in the spotlight related to the Brexit, which is probably due to the fact that the results came out on Friday and the current week’s top will most likely include names like Barclays Plc (NYSE:BCS) or Lloyds Banking Group PLC (ADR) (NYSE:LYG). 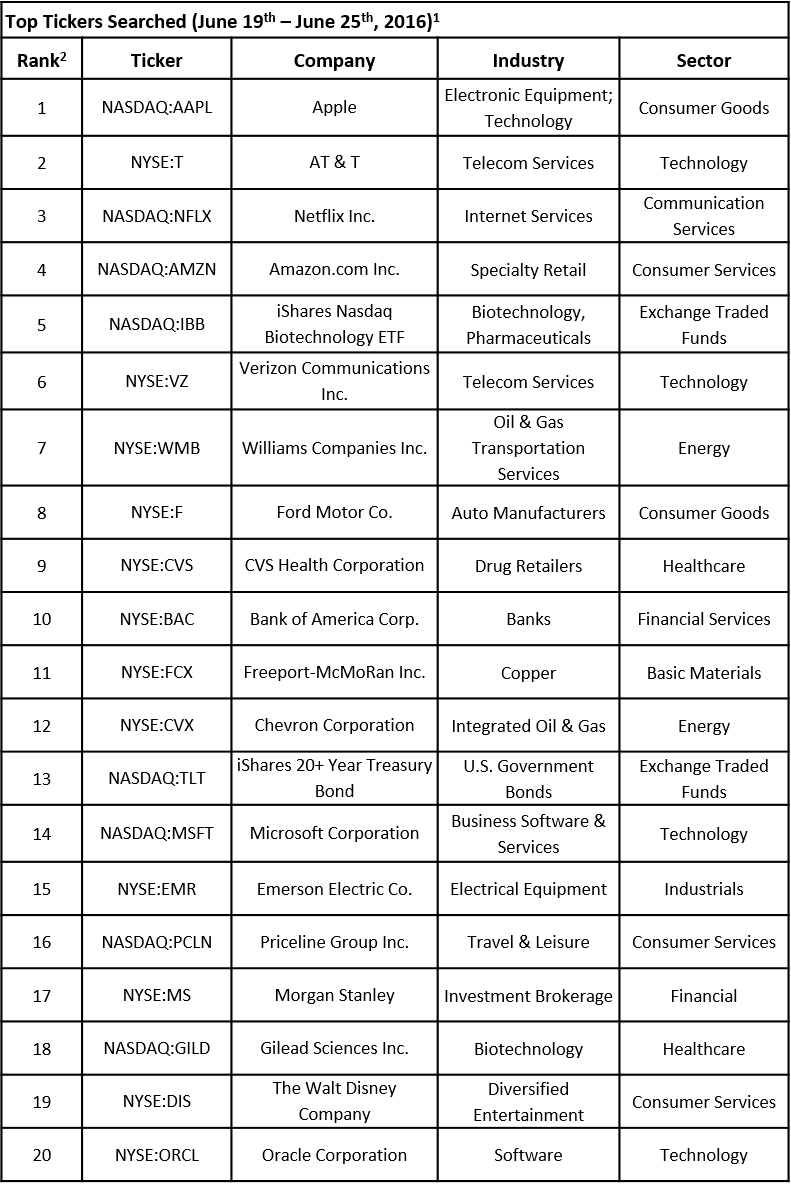 Nevertheless, last week’s list contained a few surprises, such as AT&T (NYSE:T), which jumped to the second spot from the fourth, although the top three still included Apple Inc. (NASDAQ:AAPL) on the first position and Netflix Inc. (NASDAQ:NFLX), similar to the previous week. Among the newcomers last week were Ford Motor Co. (NYSE:F), CVS Health Corporation (NYSE:CVS), Emerson Electric Co. (NYSE:EMR), Priceline Group Inc. (NYSE:PCLN), Morgan Stanley (NYSE:MS), Gilead Sciences (NASDAQ:GILD), and Oracle Corporation (NYSE:ORCL). One more newcomer to the list of the 20 most searched tickers last week was Williams Companies Inc. (NYSE:WMB) and in this article we are going to take a closer look at the developments that put this company in the spotlight.

For the past several months the main news concerning Williams Companies have been its merger with Energy Transfer Equity (NYSE:ETE). Energy Transfer started to pursue Williams Companies over 18 months ago and in September, 2015, the latter agreed to be acquired in a $33 billion deal. However, the subsequent slid in oil prices, reduced the value of both companies substantially and, even though Energy Transfer Equity tried to pursue Williams to renegotiate the terms of the deal, it was rejected. Last week, Energy Transfer took the deal to the court after both parties had accused each other of breaching the agreement. As the ruling by the Vice Chancellor Sam Glasscock of the Delaware Chancery Court was expected on Friday, throughout the last week the focus was on the merger, with most analysts expecting a ruling in favor of Energy Transfer. As expected, the court allowed Energy Transfer Equity to walk away from the deal, saying that “Williams has failed to demonstrate that the partnership has materially breached its contractual obligation”.

Williams had planned to appeal the decision and to go through with the merger, as supported by the shareholders’ vote on Monday in favor of the merger. However, yesterday Energy Transfer Equity cancelled the deal and Williams said it would seek monetary damages and the fight seems to be far from over.