Even though the US stock market started last week on a negative note, losing ground on Monday and extending the losses from the previous Friday following the UK’s vote to leave the European Union, both S&P 500 and Dow Jones Industrial Average recovered in the second half of the week and ended the week with gains above 3%. However, the relief didn’t help both indices to completely recover from the post-Brexit two days of losses. Financial advisers seem to have steered away from UK stocks that plunged after the June 23 referendum and kept their focus on technology, according to the list of the 20 most-searched tickers among financial advisors compiled by TrackStar, the official newsletter of the official newsletter of Investing Channel’s Intuition division.

The list showed a total of seven technology companies among the top 20, with the top stocks in the list remaining Apple Inc (NASDAQ:AAPL) and Netflix Inc. (NASDAQ:NFLX). Two banking stocks also made the list, Bank of America (NYSE:BAC) and JPMorgan Chase & Co. (NYSE:JPM), which aside from the Brexit caught the attention in connection with the stress test results announced last week. Surprisingly, healthcare was one of the overlooked sectors among financial advisors, with just Gilead Sciences (NASDAQ:GILD) featuring in the list. 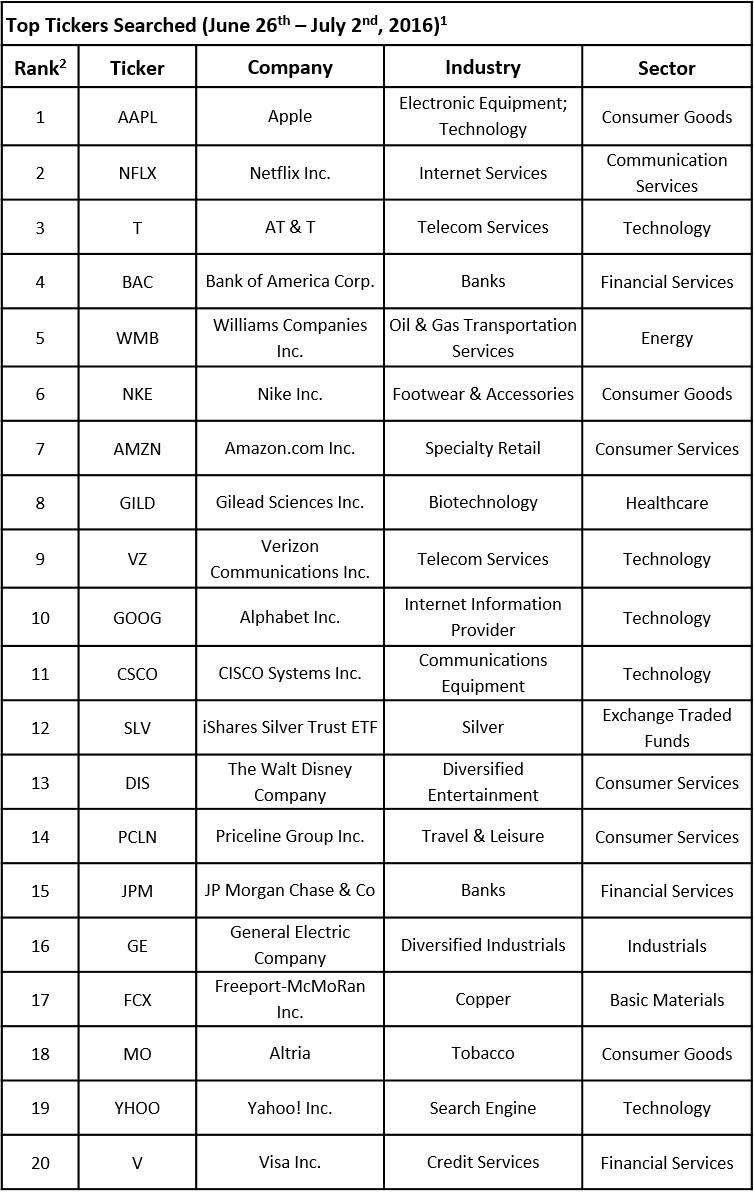 In this article, we are going to focus our attention on a stock that appears among the top 20 most-searched tickers relatively rarely – Altria Group (NYSE:MO). The reasons why financial advisors’ interest towards the company increased are twofold. First, Altria Group is one of the few companies, whose core business doesn’t have exposure to the UK and the European Union after the spin-off of Philip Morris International Inc. (NYSE:PM) in 2008. Therefore, the lack of currency headwinds that has always been an attractive point for buying shares of Altria Group became an even stronger point in buying shares following the Brexit. After the Brexit news, stocks of companies with US-focused businesses gained ground and Altria Group’s shares inched up by 1% on June 24 and gained more than 3% during the following week. On the other hand, Philip Morris International’s stock slid by 4% on June 24 and traded along the market on the following week.

Another reason why Altria Group caught the attention of financial advisors is the company’s exposure to the UK via its stake in SABMiller plc. In November 2015, SABMiller agreed to be acquired by Anheuser Busch Inbev SA (NYSE:BUD) in a deal with a total value of $107 billion at the time of the announcement. SABMiller is trading on the London Stock Exchange and Altria Group is its largest shareholder with a 27% stake. After the deal is closed, the tobacco company will receive a 10.5% stake in Anheuser Busch, two board seats and 3.7788 GBP per share. However, following the Brexit, the pound slipped to a 31-year low against the dollar, which should reduce the cash portion that Altria will receive. However, the company hedged itself against currency fluctuations, according to its February 10-K report, which said that Altria Group had entered “into a derivative financial instrument in the form of a put option (the “option”) to hedge Altria Group, Inc.’s exposure to foreign currency exchange rate movements for the GBP, which would impact the USD cash consideration that Altria Group, Inc. expects to receive under the PSA [partial share alternative].”

Therefore, it seems that the move to hedge against the currency fluctuations was a smart one and Altria seems to be well-positioned to benefit from the merger not just immediately after its completion but also from the future performance of Anheuser Busch Inbev. However, since the deal has been known for a while, the main reason why financial advisors focused their attention to the stock last week seems to be the company’s focus on the US tobacco market and its position as a “Stable Grower”, as RBC’s Jonathan Golub called it in a note that outlined stocks poised to outperform following the Brexit.