The US stock market had a strong run last week as the second-quarter earnings season started. Even though the majority of the successful Wall-Street players advise not to focus on earnings and to keep the big picture in mind, given the hype from the media, speculators and traders surrounding financial reports, over the next several weeks, Wall Street will watch closely financial results that companies turn in and will try to assess their performance in the near future. So far, the results have been mostly better-than-expected and showed that companies keep a strong momentum, although, the overall view, is that companies will report earnings and revenues lower compared to the second quarter of 2015.

On the back of mostly solid results, the S&P 500 inched up by 1.5% last week, while Dow Jones Industrial Average gained over 2%. This week also seems to be on a good track, boosted by better-than-expected results reported by Microsoft Corporation (NASDAQ:MSFT), Johnson & Johnson (NYSE:JNJ), Morgan Stanley (NYSE:MS) and others. Financial advisors are also keeping an eye on the financial results, but keep their interest oriented towards companies with strong fundamentals and solid long-term growth potential. TrackStar, the official newsletter of the official newsletter of Investing Channel’s Intuition division, compiled a list of the 20 most-searched tickers among financial advisors during the week between July 10 and July 16. 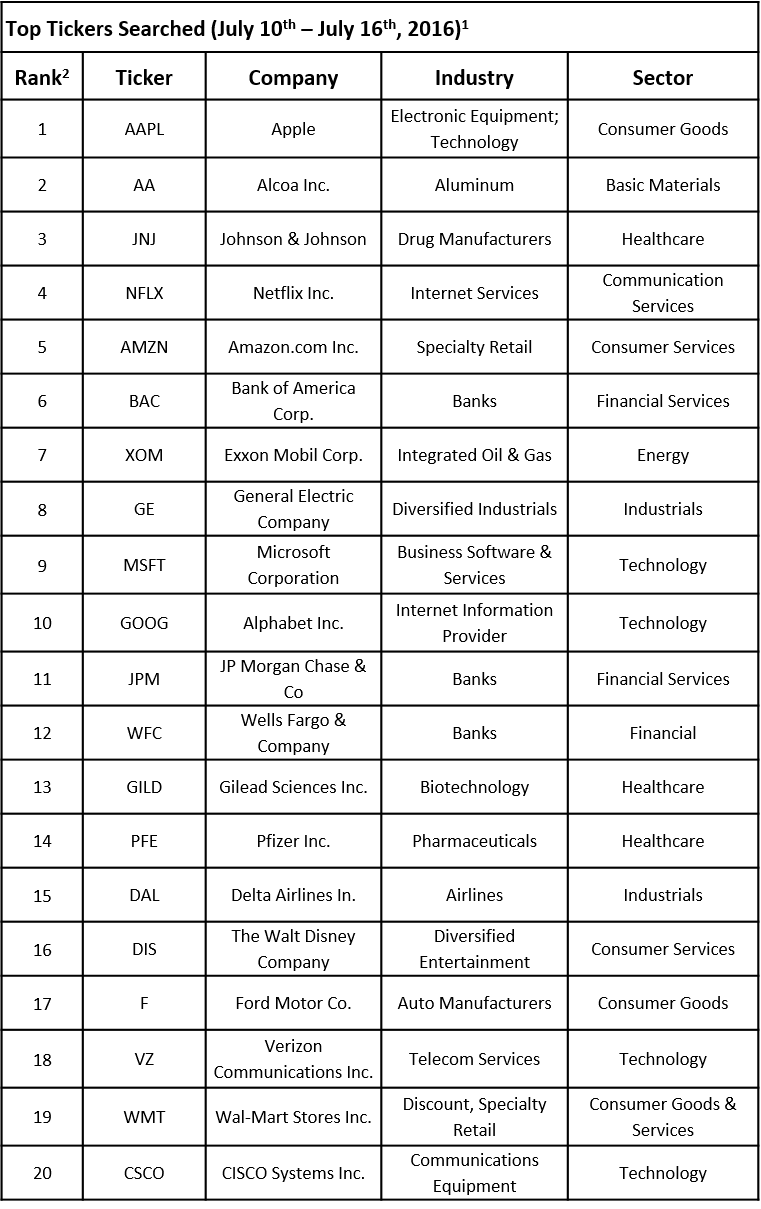 Similar to most previous weeks, Apple Inc. (NASDAQ:AAPL) maintained the top spot, followed by Alcoa Inc. (NYSE:AA), which appeared in the list after the company was one of the first to report its financial results, on June 11. Overall, compared to the previous week, last week’s list featured many of the same names, such as, Netflix Inc. (NASDAQ:NFLX), Microsoft Corporation (NASDAQ:MSFT) and Cisco Systems Inc. (NASDAQ:CSCO) from the tech space, or Bank of America (NYSE:BAC), JPMorgan Chase & Co. (NYSE:JPM), which represented the financial sector. In this article, we are going to take a closer look at the second most-popular stock among financial advisors – Alcoa Inc. (NYSE:AA).

Alcoa’s stock had a pretty strong run last week, ending it with gains of over 16%, which helped the stock to turn into green territory in year-to-date terms (it was trading slightly negative until July 8). As stated earlier, Alcoa was among the first companies to kick off the second-quarter earnings season by releasing the information on the evening of July 11. The aluminum producer registered EPS of $0.05 on revenue of $5.30 billion, which topped the estimates of $0.10 in EPS on $5.2 billion in revenue. However, non-adjusted EPS of $0.09, which includes chargers related to restructuring and separation costs, was lower than the $0.10 figure reported a year earlier, while second-quarter revenue declined by 10.2% year-on-year.

Investors well received the results and were also pleased to see that Alcoa keeps on track its plan to split into two companies later this year. Following the separation, Alcoa will change its name to Arconic and will focus on engineering parts for aerospace and automotive segments. The spun-off company will be named Alcoa Corp and will incorporate Alcoa’s core mining, smelting and refining businesses. So far, Alcoa managed to successfully reduce its costs and sell assets as it nears the completion of the separation.

In addition to earnings and updating investors on its separation process, Alcoa also provided a strong guidance for the second half of 2016 and full 2017, which included 0%-3% growth in deliveries for the aerospace segment and double-digit growth in 2017. Regarding aluminum, Alcoa said it projects a deficit of around 775,000 metric tons globally.

So, overall, investors were happy with Alcoa’s financial results, especially with strong results delivered by the divisions that will be part of Arconic after the split, which helped offset the declines in prices of aluminum. Analysts, in their majority, reiterated mostly ‘Buy’ and ‘Hold’ ratings they had had on the stock before Alcoa’s results were reported.

Microsoft (MSFT) Stock Price Surges, But Here’s Why the Hype Will Not Last