The second-quarter earnings season is ongoing and the market is rallying as the majority of companies have reported better than expected financial results. During the week between July 18 and July 22, the S&P 500 gained 0.61%, while Dow Jones inched up by 0.29%. The increase registered in the US stock market was also boosted by a drop in domestic crude supplies of 2.3 million barrels reported by the US Energy Information Administration for the week ended July 15.

In this way, Netflix Inc. (NASDAQ:NFLX), whose stock slid on Tuesday after the company posted subscription numbers below expectation, surged to the first spot, replacing Apple Inc. (NASDAQ:AAPL), which held the top position for weeks and was moved down to the second spot. Bank of America Corp. (NYSE:BAC) climbed to the third position in connection with strong second-quarter results. The list also featured Yahoo! Inc. (NASDAQ:YHOO), which was in the spotlight towards the end of the week after reports emerged that Verizon Communications Inc. (NYSE:VZ) was going to acquire it, with the transaction having been officially confirmed on Monday. In this article, let’s focus our attention on the stock that ranked as the most searched last week – Netflix. 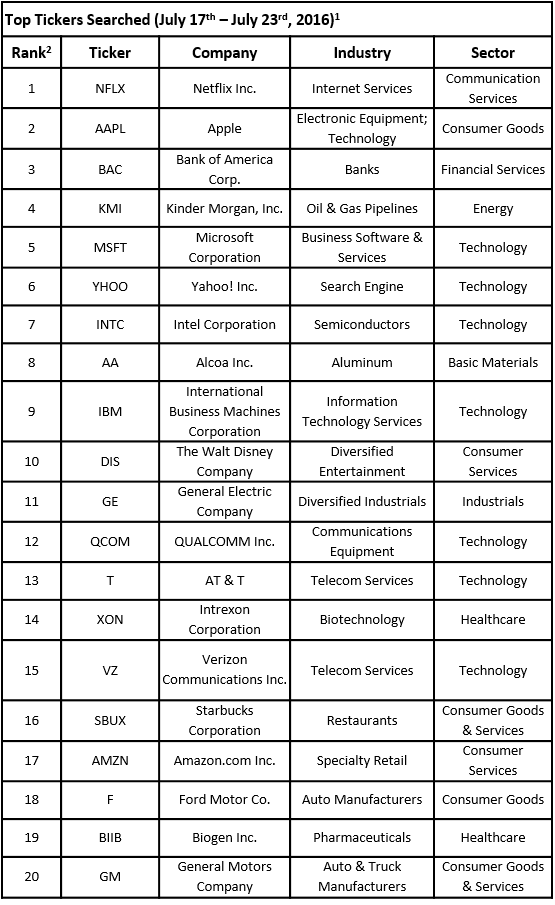 As stated earlier, Netflix Inc. (NASDAQ:NFLX) captured attention last week after the company reported its second-quarter financial results on Monday. Even though the results were better-than-expected, the stock lost 16% in extended trading on Monday and plunged by 13% during the week. Netflix posted earnings of $0.09 per share, which topped the estimates of $0.02, while revenue of $2.11 billion advanced by 28% on the year and was in line with analysts’ expectations. However, one of the key metrics, when it comes to Netflix, is its subscribers figures. During the second quarter, Netflix said it added 1.7 million subscribers worldwide, missing its own forecast of 2.5 million. Among them, the company had 160,000 new memberships in the US and 1.52 million internationally, compared to expectations of 500,000 and 2.0 million, respectively.

For the third quarter, Netflix expects to add 2.0 million new subscribers internationally, including 300,000 net adds in the US. One of the main factors that has affected and will affect net additions figure is the ‘un-grandafathering’, which is the price increases for its older subscribers. In addition, the company said in a statement: “Our global expansion is an exciting opportunity that will unfold over many years. Continued US growth will be a part of it and there is no change to our view that in the US Netflix can reach 60-90 million members. We continue to expect to run around break-even on a net income basis in 2016 and to generate material profits in 2017 and beyond. We will drive operating profit growth in 2017 by reducing our international losses and continuing to grow US profit.”

All in all, despite the market’s reaction to Netflix Inc. (NASDAQ:NFLX)’s second-quarter results, analysts reiterated their ratings on the company’s stock, which mostly include ‘Buy’ and ‘Neutral’ ratings. Analysts consider that Netflix has more room to grow in international markets, particularly China, where Netflix faces big regulatory challenges, but assures investors that it will not give up its plans to launch in the country. In addition, its original series in English and other languages can help it to add more subscribers globally.