In volatile trading last week, the S&P 500 inched down by 0.07%, while Dow Jones Industrial Average lost 0.75. The ongoing earnings season was the main reason behind the movement of stocks throughout the week, although investors also kept an eye on the Fed’s two-day meeting on Tuesday and Wednesday. As expected, the Federal Open Market Committee left the key interest rate unchanged, but it provided a brighter outlook on the US economy and pointed out a strengthening labor market. On the other hand, the FOMC also highlighted a low inflation, which is expected to pick up after oil prices reverse their decline. In addition, as the FOMC said that “near-term risks to the economic outlook have diminished”, it also hinted towards a hike in September.

Nevertheless, when it comes to individual stocks, the main factor behind their trajectory last week was their financial reports. TrackStar, the official newsletter of the official newsletter of Investing Channel’s Intuition division, has compiled a list of the 20 most popular stocks among financial advisors in the trading week between July 25 and July 29, which showed that tech stocks remained in the spotlight, similar to previous weeks. 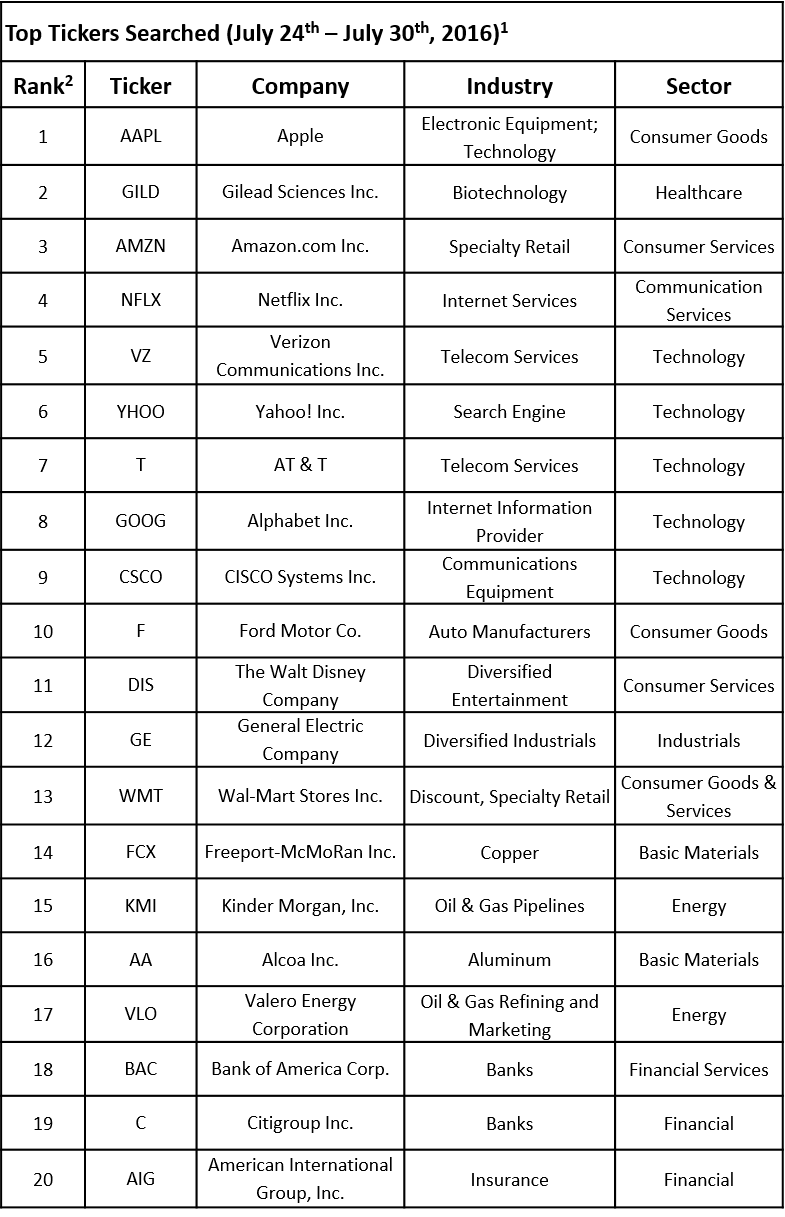 Apple Inc. (NASDAQ:AAPL) regained its top position as the tech giant posted its fiscal third-quarter results on July 26. It was followed by Gilead Sciences (NASDAQ:GILD) and Amazon.com, Inc. (NASDAQ:AMZN), which also released their quarterly results last week. Verizon Communications, Inc. (NYSE:VZ) and Yahoo! Inc. (NASDAQ:YHOO) also ranked among the top stocks, amid Verizon reporting its financial results on Tuesday (Yahoo posted its financials a week earlier) and amid investors assessing the upcoming acquisition of Yahoo by Verizon. In this article, let’s focus our attention on one stock from the list – Apple.

Apple Inc. (NASDAQ:AAPL) has been the either the most popular stock or among the top 3 for the last several months. Financial advisors keep a close eye on Apple, since the company is constantly in the spotlight in connection with the popularity of its products. As stated earlier, Apple reported its financial results for the fiscal third quarter on Tuesday after the closing bell and on Wednesday, its stock advanced by over 6%, ending the week with gains of 5.6%. The iPhone maker reported EPS of $1.42 on revenue of $42.4 billion, versus analysts’ expectations of $1.38 in EPS on sales of $42.09 billion. Even though the company topped the estimates, in year-on-year terms, Apple’s results declined from EPS of $1.85 and revenue of $49.61 billion posted for the third quarter of fiscal 2015. iPhone shipments, which represents a key metric when assessing Apple’s performance, also topped the estimates with a figure of 40.4 million units, versus estimates of 40.02 million.

The results showed that Apple’s plan to launch a cheaper iPhone SE in order to attract more users to its ecosystem was a good idea and the company CFO, Luca Maestri, said Apple’s AppStore revenue “was the highest ever”. However, some analysts expressed concern that the popularity of the lower cost model could damage the sales of Apple’s more expensive models and implies lower margins for the company. In this way, analysts and investors expect the release of the next iPhone model later this year in order to get a better idea about Apple’s margins and profitability

Fannie and Freddie: REO inventory declined in Q2, Down 33% Year-over-year

15 Most Valuable Telecom Companies In The World