The S&P 500 inched up by 0.43% last week, boosted on Friday by strong nonfarm payroll data. On Friday, the Labor Department said the US economy added 255,000 jobs in July, which crushed the estimates of 180,000 jobs. However, the unemployment rate remained unchanged at 4.9%, which was slightly lower than expectations of 4.8%. Aside from giving a boost to the stock market, the nonfarm payroll data increased the probability of an interest rate hike in September. In addition, last Thursday, the Federal Reserve Bank of Atlanta projected that the US economy would grow by 3.7% in the third quarter.

When it comes to stocks followed by financial advisors, data compiled by TrackStar, the official newsletter of Investing Channel’s Intuition division, showed a slight decrease in popularity of the technology sector. Though Apple Inc. (NASDAQ:AAPL) remained the most searched stock during the trading week between August 1 and August 5, there were just three technology stocks among the top 20 most-searched, including Netflix Inc. (NASDAQ:NFLX) and Amazon.com Inc. (NASDAQ:AMZN). On the other hand, healthcare dominated the list, with seven companies ranking among the most-searched. Moreover, as the earnings season is almost over, financial advisors seem to be turning their attention back to ETFs and four funds made the list at the end of last week 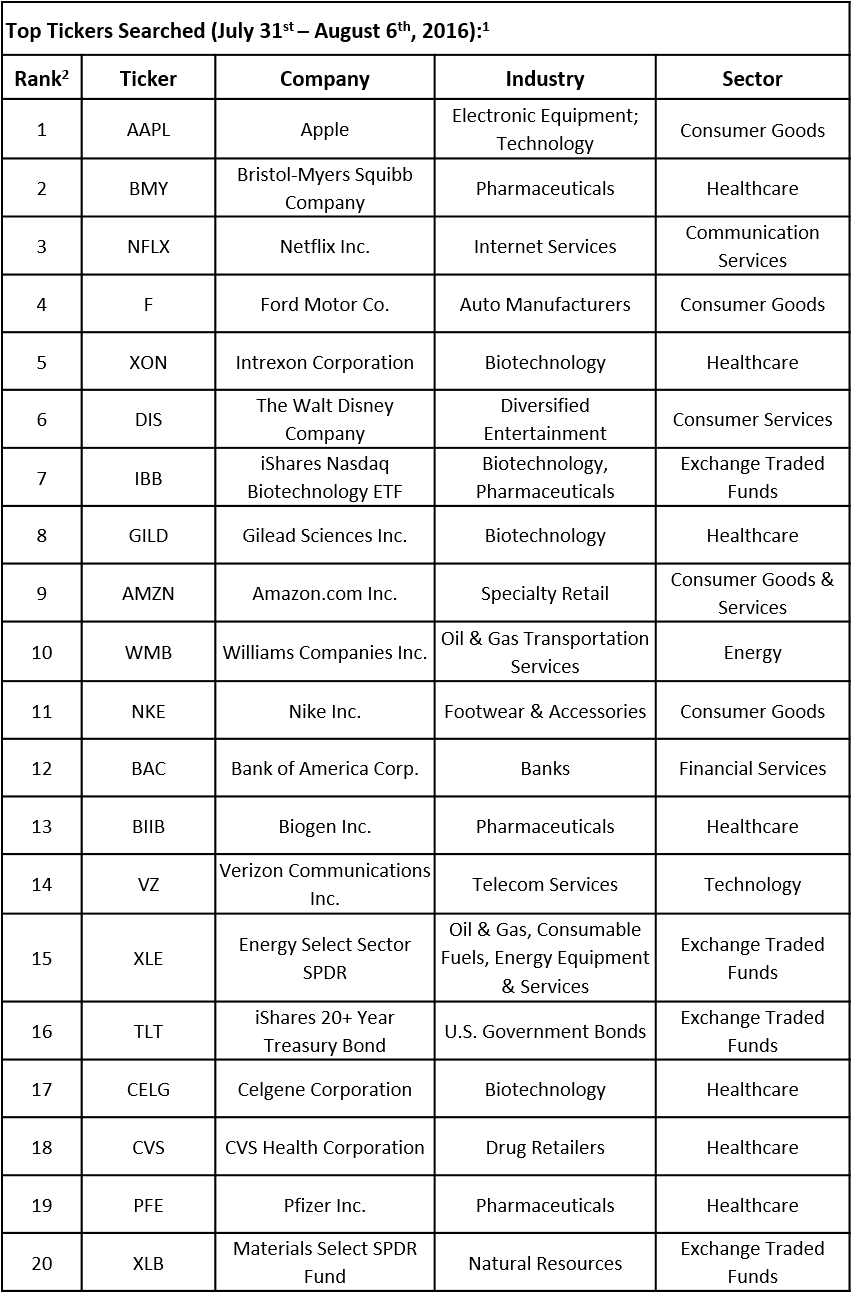 However, let’s focus our attention to the healthcare sector. Out of seven companies that ranked in TrackStar’s top 20 list, three were pharmaceutical companies, including Bristol-Myers Squibb Co (NYSE:BMY), which ranked as the second most-popular stock at the end of the week. It’s not surprising that Bristol-Myers Squibb gained the attention of financial advisors last week, since the stock ended the week 15% in the red, mainly due to a dip registered on Friday, when company lost around $20 billion from its market capitalization. The decline was due to a surprise failure in a clinical trial of Bristol-Myers Squibb’s cancer drug Opdivo. The company said that its CheckMate -026 trial that investigated the use of Opdivo (nivolumab) as monotherapy did not meet its primary endpoint of progression-free survival in patients with untreated advanced non-small cell lung cancer and did not show better results compared to chemotherapy. Nevertheless, Giovanni Caforio MD, CEO of Bristol-Myers Squibb, said in a statement that they are disappointed in the trial, but “remain committed to improving patient outcomes through our comprehensive development program. The CEO also mentioned a Phase 3 CheckMate -227 study that explores a combination of Opdvio and Yervoy.

Investors were surprised by the results, as the company had high hopes that Opdivo would allow it to explore further the cancer immunotherapy market. However, the dip can be considered an overreaction, since Opdivo, which costs $12,900 per month, is already approved to treat certain types of cancer, such as melanoma. In its financial report for the second quarter, Bristol-Myers Squibb pointed out the approval of Opdivo and Yerevoy regimen for Metastatic Melanoma in Europe, while in the US Opdivo was approved for the treatment of Classical Hodgkin Lymphoma. Overall, during the second quarter, Bristol-Myers’ revenue went up by 17% on the year to $4.9 billion and topped analysts’ expectations by $220 million. The total sales, were dominated by Opdivo, which registered $840 million in revenue, compared to just $122 million a year earlier.

Therefore, the drop of Bristol’s stock on Opdivo news could also represent a good entry point to buy the stock. With investors keeping an eye on Bristol, as well as other companies engaged in cancer immunotherapy drugs, Bristol is likely to recover if the company shows strong results from its ongoing CheckMate studies involving Opdivo.