Last week was pretty uneventful for the US stock market and the S&P 500 ended the week with small gains of 0.05%, while Dow Jones Industrial Average inched up by 0.18%. The earnings season continues and the spotlight is on retailers, with a bunch of them (Macy’s, Kohl’s, JC Penney) having reported their results last week. TrackStar, the official newsletter of Investing Channel’s Intuition division has compiled its weekly list of the 20 most searched tickers among financial advisors, which showed pretty much the same trends.

Financial advisors stayed focused on big companies with strong fundamentals, with some emphasis towards the earnings season. Bristol-Myers Squibb Company (NYSE:BMY) climbed to the first spot from the second seen a week earlier, as investors are still assessing the implications of the failure of its cancer drug, Opdivo. Tech stocks were pushed down the list and Apple Inc. (NASDAQ:AAPL) and Netflix Inc. (NASDAQ:NFLX) ranking on the fourth and fifth spots, down from the first and third registered a week earlier. Across sectors, Consumer Goods & Services stocks dominated the list, with The Walt Disney Company (NYSE:DIS) ranking on the second spot, followed by names like Wal-Mart Stores, Inc. (NYSE:WMT), Ford Motor Company (NYSE:F), and Nike Inc. (NYSE:NKE). 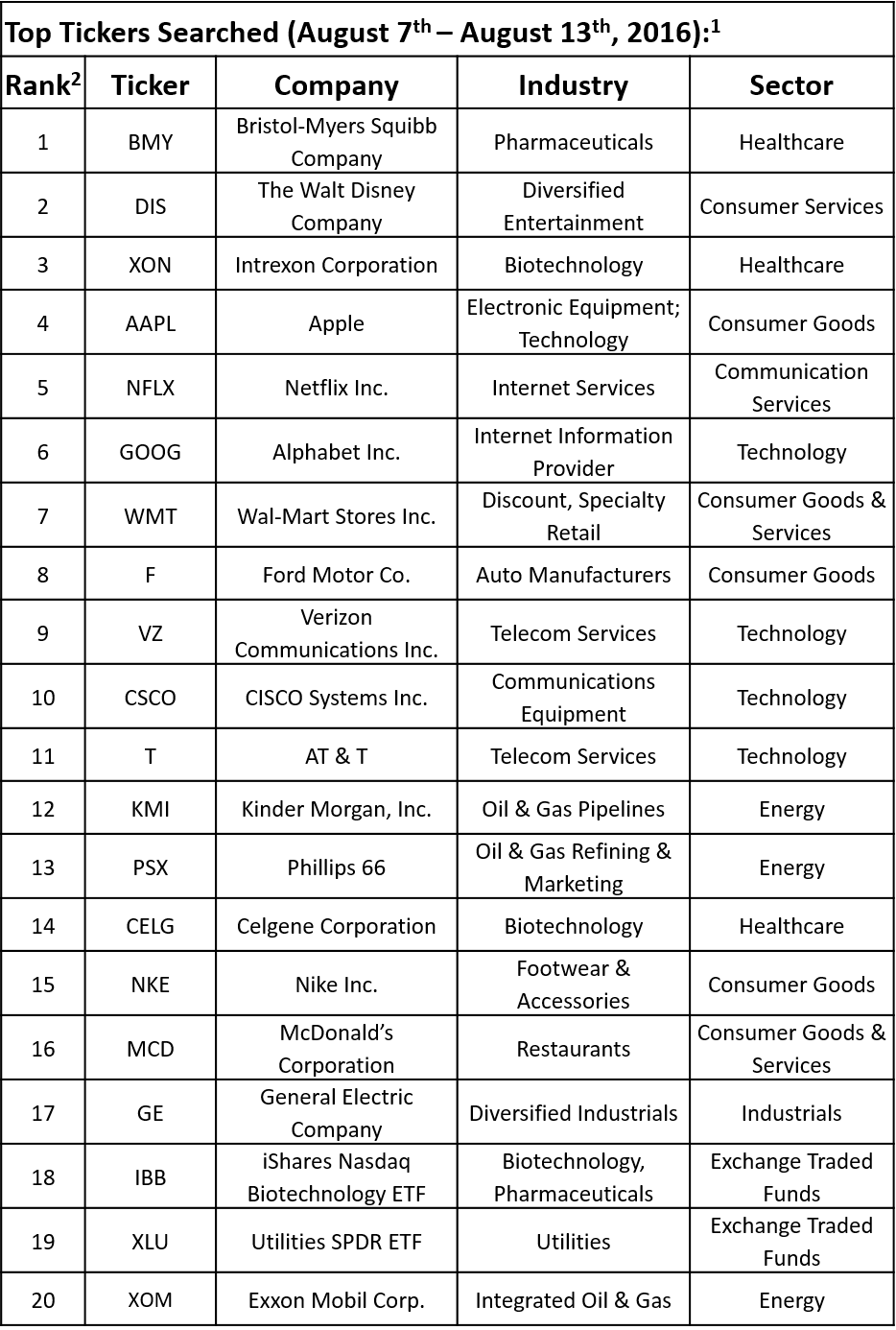 In this article, we are going to discuss the second most popular ticker among financial advisors in the trading week between August 8 and August 12, which was The Walt Disney Company (NYSE:DIS).The Walt Disney Company (NYSE:DIS) inched up by slightly over 1% during the last week as the company reported its financial results for the fiscal third quarter on Tuesday. The company managed to beat analysts’ top- and bottom-line estimates with EPS of $1.62 on revenue of $14.28 billion, versus consensus estimates of $1.61 and $14.15 billion, respectively. In year-on-year terms, the company also managed to show revenue growth of 9% on the year, helped by 40% increase in revenue registered by its Studio Entertainment segment, which was boosted by sales of ‘Star Wars: The Force Awakens’ and ‘Zootopia’ titles and box-office revenue of ‘Captain America: Civil War’, ‘Finding Dory’ and ‘The Jungle Book’.

On the other hand, other segments saw more modest revenues. Revenue of the Studio Entertainment unit amounted to $2.85 billion. Parks and Resorts saw its revenue jump by 6% to $4.38 billion, Media Networks revenue went up by just 2% to $5.91 billion, while Consumer Products & Interactive Media revenue declined by 1% to $1.15 billion.

However, strong financial results aside, investors were interested to see any updates regarding The Walt Disney Co.’s ESPN, which had sparked growth concerns earlier. With cord-cutting becoming a phenomenon that is worrying networks and cable providers, The Walt Disney Company seems to have found a solution to adjust to the new environment. The company announced that it would acquire a 33% stake in BAMTech, the streaming media division created by Major League Baseball. Under the terms of the deal, ESPN plans to launch a new multi-sport subscription streaming service that will include live regional national and international sporting event. However, the new service will be separated from ESPN’s traditional cable bundle and will include content that does not appear on ESPN’s linear networks. In addition, BAMTech will provide streaming from Disney’s ABC Television Group. The deal to acquire a 33% stake in BAMTech will cost Disney $1.0 billion, but the company has the right to acquire a majority stake in the future.

Following the release of the financial results and news regarding the acquisition of the stake in BAMTech, most analysts reiterated their ratings on the stock and only Macquarie upgraded it to ‘Outperform’ from ‘Neutral’ with a $125 price target.

Microsoft (MSFT) Gets Its Groove Back, Surpassing Apple (AAPL)?

Housing Information out Next Week as October Winds Down