The earnings season is basically over, as retailers released their financial results last week. According to FactSet, out of 95% of the companies in the S&P 500 that had reported their results by August 19, 71% managed to top analysts’ estimates and 54% companies posted better-than-expected revenues. In economic news, the US Federal Reserve released minutes from the Federal Open Market Committee’s July policy meeting. Even though the central bank did not raise interest rates, members of the FOMC have a positive outlook on the US economy and consider that an increase in interest rates might be implemented soon, but more data has to be analyzed before a decision is made. Meanwhile, during the trading week between August 15 and August 19, the S&P remained close to flat as it ended the week 0.01% in the red, while Dow Jones Industrial Average inched down by 0.31% during the week.

With earnings season over, financial advisors refocused their attention on companies that did not see any significant developments, but are solid long-term performers. According to data compiled by TrackStar, the official newsletter of Investing Channel’s Intuition division, the three most searched stocks by financial advisors during the last week were Apple Inc. (NASDAQ:AAPL), Alphabet Inc. (NASDAQ:GOOG) and Bank of America Corp. (NYSE:BAC). Across sectors, out of the 20 stocks in TrackStar’s list, six were tech companies. The ranking also included four consumer stocks, including two retailers, particularly Wal-Mart Stores Inc. (NYSE:WMT) and Target Corp. (NYSE:TGT), both of whom reported their financial results last week. 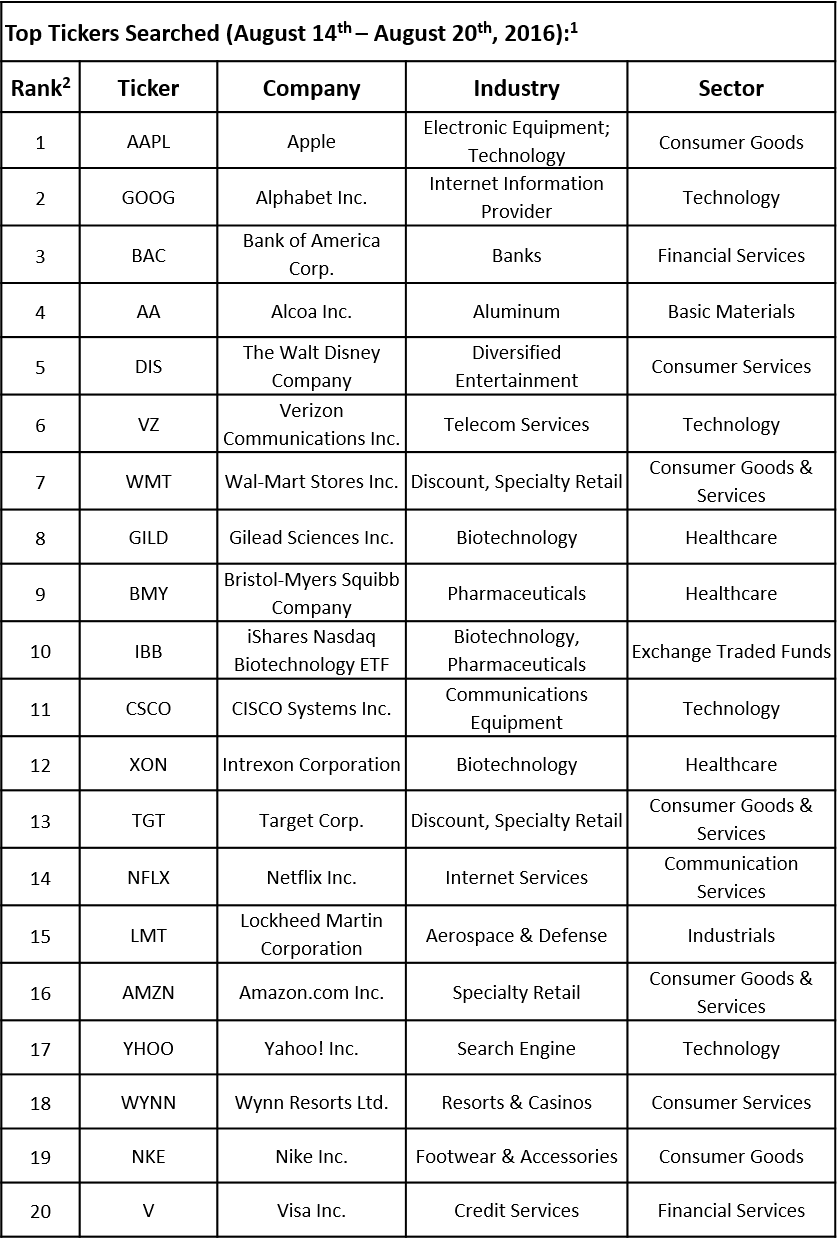 In this article, we are going to discuss Wal-Mart Stores Inc. (NYSE:WMT). The company’s stock lost 1.40% during the last week, even though it advanced by 1.90% on Thursday on the back of the retailer releasing its financial results for the second quarter of fiscal 2017. Wal-Mart’s second-quarter adjusted EPS of $1.07 was higher than the consensus estimate of $1.02, while revenue of $120.90 billion topped analysts’ expectations by $740 million.

The operator of retail stores registered a US comparable-store sales growth of 1.6% during the second quarter, driven by a 1.2% increase in traffic. Comp sales increase was higher than its own guidance and analysts’ estimates of 1% and 0.9%, respectively, and was the highest growth in four years.

Wal-Mart’s e-commerce sales went up by 11.8% on the year, globally (on a constant currency basis), and Gross Merchandise Volume advanced by 13%. Online sales has been a weak point for Wal-Mart, but the company is taking steps to improve its presence on the online market, where it competes with Amazon.com Inc. (NASDAQ:AMZN). It has recently launched ShippingPass, a subscription service similar to Amazon Prime that offers free two-day shipping for $49 a year. In addition, it has acquired Jet.com for $3.3 billion.

Aside from reporting by strong results, Wal-Mart also raised its guidance and now, for the full fiscal 2017, Wal-Mart expects adjusted EPS in the range of $4.15 to $4.35 or GAAP EPS between $4.29 and $4.49, even though both figures are expected to be offset by $0.05 from its planned acquisition of Jet.com.

Even though the market reacted positively to Wal-Mart’s results on Thursday, on Friday the stock retreated by 2%. The majority of analysts that cover the stock maintained their ratings unchanged on Friday, although several of them, including Royal Bank of Canada and BMO Capital Markets raised their price targets to $76 and $72.80 respectively, despite reiterating the ‘underperform’ ratings.

To sum up, Wal-Mart managed to please the investors bullish on the stock, which include well-known names like Warren Buffett, Ken Fisher, and Donald Yacktman, among others. Since the beginning of the year, its shares are up by over 18% and provide investors with a dividend yield of 2.76%.

Why Metaverse Stocks – Meta Platforms, Roblox – Are Alive and Well

Take Advantage of The Temporary Slump in the Energy Sector