The US stock market lost ground last week, reversing the gains registered in the first half on Friday after Fed Chair Janet Yellen gave a speech at the Jackson Hole annual summit, where she hinted towards an interest rate hike in the upcoming months. In this way, the S&P 500 declined by 0.68% during the week between August 22 and August 26, while Dow Jones Industrial Average and NASDAQ slid by 0.85% and 0.37%, respectively. Among other news, the stocks were under pressure from a decline in oil prices and lower-than-expected existing home sales figures. In addition, the healthcare sector registered a drop in the second half of the last week, after Mylan was criticized for price increases for its EpiPen product.

As usual, TrackStar, the official newsletter of Investing Channel’s Intuition division, has analyzed the stocks based on how often financial advisors searched for their tickers during the last week. Among the most searched tickers, the top three spots remained unchanged compared to the previous week, as they included Apple Inc. (NASDAQ:AAPL), Alphabet Inc. (NASDAQ:GOOG) and Bank of America Corp. (NYSE:BAC).

Aside from Apple and Alphabet, the only other tech stock that made the list of the 20 most popular stocks was Netflix Inc. (NASDAQ:NFLX). The healthcare sector was also represented in the list by three companies, Inrexon Corporation (NYSE:XON), which ranked on the fourth spot, Bristol-Myers Squibb Company (NYSE:BMY) and Pfizer Inc. (NYSE:PFE). Across sectors, the most popular were Consumer Goods & Services stocks, which counted six positions in the top 20 list and also included two newcomers, Best Buy Company Inc. (NYSE:BBY) and Starbucks Corporation (NASDAQ:SBUX). 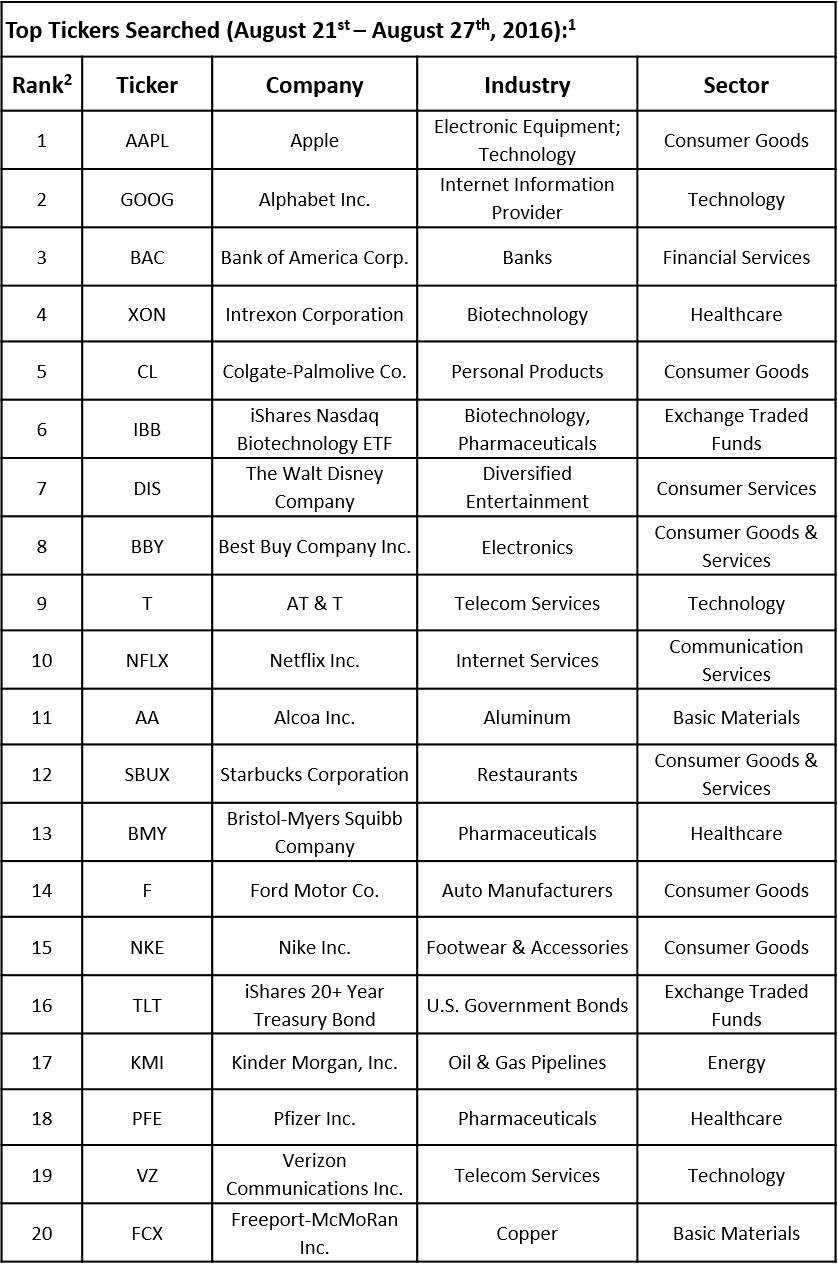 In this article, let’s discuss one of the companies that made the list for the first time in the last two weeks, particularly, Best Buy Company Inc. (NYSE:BBY). The $12 billion electronics retailer saw its shares surge by more than 18% during the last week, which boosted its year-to-date return to over 25%. The stock mainly surged on Tuesday on the back of Best Buy’s results for the second quarter of fiscal 2017. For the three-month period ended July 30, the company posted non-GAAP EPS of $0.57 on revenue of $8.53 billion, which topped analysts’ consensus estimate by $0.14 and $130 million, respectively. Even though the revenue growth was flat in annual terms, EPS went up by 16% on the year, which highlights’ the management’s commitment to cut costs and improve efficiency. In addition, the company registered domestic comparable store sales growth of 0.8% during the quarter, compared to its estimates of flat growth, while online sales surged by 24% in the quarter.

For the current quarter, Best Buy estimates revenue growth between flat and 1% to a range of $8.8 billion to $8.9 billion, while domestic comparable sales are expected to grew by up to 1%. Third-quarter non-GAAP EPS are estimated between $0.43 and $0.47. For the full fiscal year, the company reaffirmed its guidance of flat revenue, but non-GAAP net income growth was raised to low-single digits from flat, as the company expects a slight revenue growth and plans to continue to execute on its cost-reduction initiatives. Since Apple’s iPhone 7 is expected to be released later this month, it’s likely that Best Buy’s sales will register an increase towards the end of the year.

It’s not surprising that the market had such a positive reaction to Best Buy’s strong results, since the general opinion is that brick-and-mortar stores are struggling to compete with online retailers, like Amazon.com, Inc. (NASDAQ:AMZN). However, Best Buy (as well as Wal-Mart, which has recently reported better-than-expected results as well) proved its investors that it is still a good investment, which is also trading at relatively modest 13-times forward earnings and offers a dividend yield of almost 3%.