Following Federal Reserve Chair Janet Yellen’s speech at the Jackson Hole symposium on August 26, investors had turned their attention to a string of economic data that was released last week and concluded with non-farm payroll figures released on Friday. The data showed that the US created 151,000 jobs in August, lower than the expected 180,000, but it was hardly a surprise, since generally, August figures don’t come ahead of estimates. However, the S&P 500 gained ground on Friday and ended last week 0.65% in the green, as weaker-than-expected non-farm payrolls suggested that the Fed would have to postpone the interest rate hike and reduced the chances of an increase in September.

TrackStar’s weekly analysis of the most searched tickers among financial advisors in the week between August 28 and September 3 also didn’t show any surprises. Among individual stocks, financial advisors kept their focus on Apple Inc. (NASDAQ:AAPL), Bank of America Corp. (NYSE:BAC) and Alphabet Inc. (NASDAQ:GOOG), the same stocks that held the top three spots of TrackStar’s list of 20 most-searched tickers for the last three weeks.

The analysis done by TrackStar, which is the official newsletter of Investing Channel’s Intuition division, also showed an increase in popularity of the iShares 20+ Year Treasury Bond (NASDAQ:TLT) ETF. TLT ranked on the sixth spot, mainly propelled by an increase in bond prices following the release of the ISM non-manufacturing Index, which declined to a five-year low of 51.4 in August, from 55.5 in July. 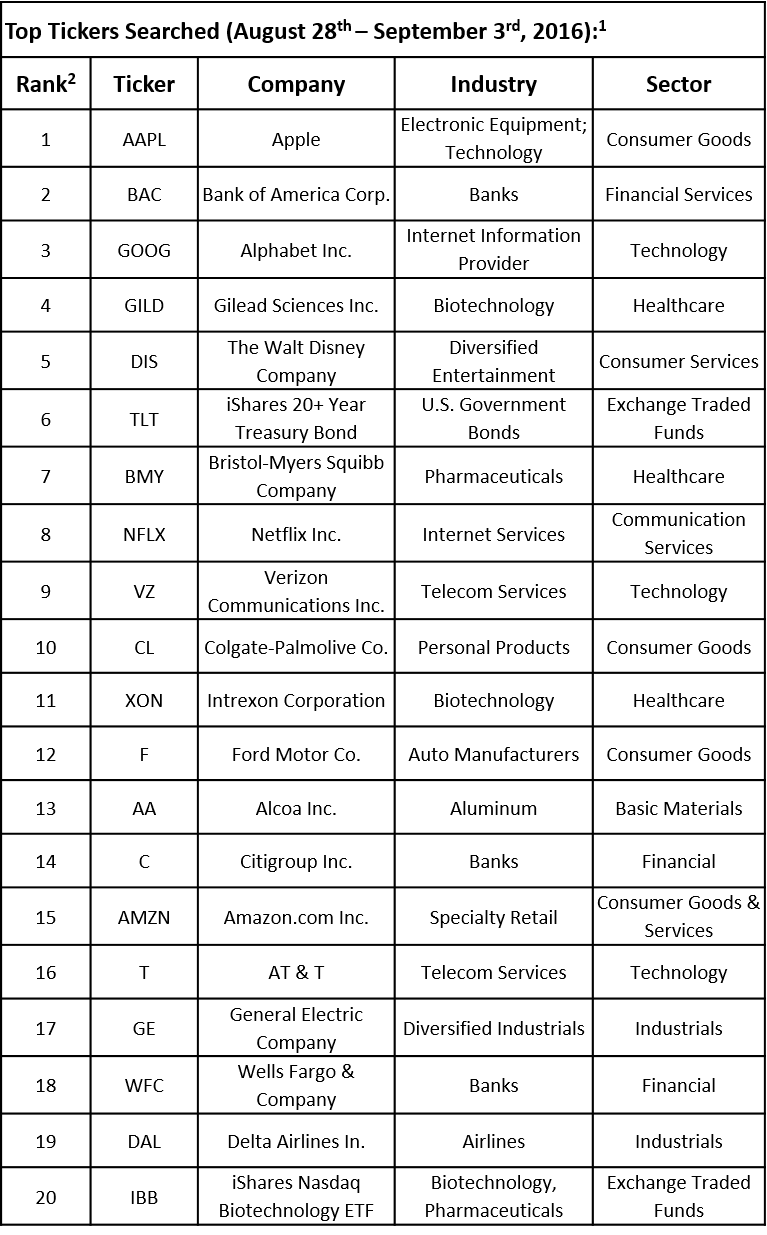 In this article, let’s take a closer look at financial advisors’ interest in the financial sector, particularly, Bank of America Corp. (NYSE:BAC). Bank of America had not been commonly-featured among the top 20 stocks until three weeks ago. The appearance of the stock among the top three most-searched tickers came amid the release of the Fed’s minutes from the FOMC July meeting and at a time when investors started more closely assessing the possibility of a rate hike as soon as September. Bank of America, being one of the largest US banks, is likely to benefit from the interest rate hike, hence the increased attention towards the stock. Through August, the stock mainly gained ground and advanced by over 11%, but has slightly declined in the second part of the last week, probably offset by disappointing economic data.

In addition, also last week, The Wall Street Journal reported that bank groups could challenge the Federal Reserve in order to change the so-called “stress tests”, which have been burdening on banks’ bottom lines amid low interest rates. Even though a final decision by banks has not been made, it could mean good news for investors, since “stress tests” also determine how much capital banks can return to their shareholders via buybacks and dividends.

In other news, Bank of America has seen several analyst updates, the most recent of which was the upgrade received from S&P Global Market Intelligence’s analyst Erik Oja, who reiterated his ‘Buy’ rating on the stock, but raised the price target to $18 from $16, citing his conviction in an interest rate hike this year, which should benefit major US banks, including Bank of America.

EIA: “The average pump price for December is on track to be the lowest for the month in eight years”