The US stock market received a major boost last week on the back of the Federal Open Market Committee’s decision to leave the interest rates unchanged. Even though, the Fed lowered the expectations for rate hikes in the next couple of years, it is still highly anticipated that the rates will be increased by the end of the year. The FOMC expressed its confidence in the labor market, but pointed out that the inflation rate is still below the 2% and stated that the economic growth is still not strong enough to justify an increase in interest rates. As the market was uplifted following the FOMC statement, the S&P 500 ended the last trading week with gains of over 1.10%, while Dow Jones Industrial Average inched up by around 0.90%.

Let’s turn our attention to individual stocks that were in the spotlight of financial advisors last week, according to TrackStar, the official newsletter of Investing Channel’s Intuition division. According to TrackStar’s list of the 20 most searched tickers last week, Apple Inc. (NASDAQ:AAPL) was the most popular stock, unchanged over the course of the last several weeks. On the second and third positions ranked The Walt Disney Company (NYSE:DIS) and Netflix Inc. (NASDAQ:NFLX), both of which gained popularity among financial advisors amid the Communacopia conference, attended by high-ranking representatives of both companies. Among the newcomers to the top 20 list were owner and operator of communication real estate American Tower Corporation (NYSE:AMT) and biotech company Esperion Therapeutics (NASDAQ:ESPR). 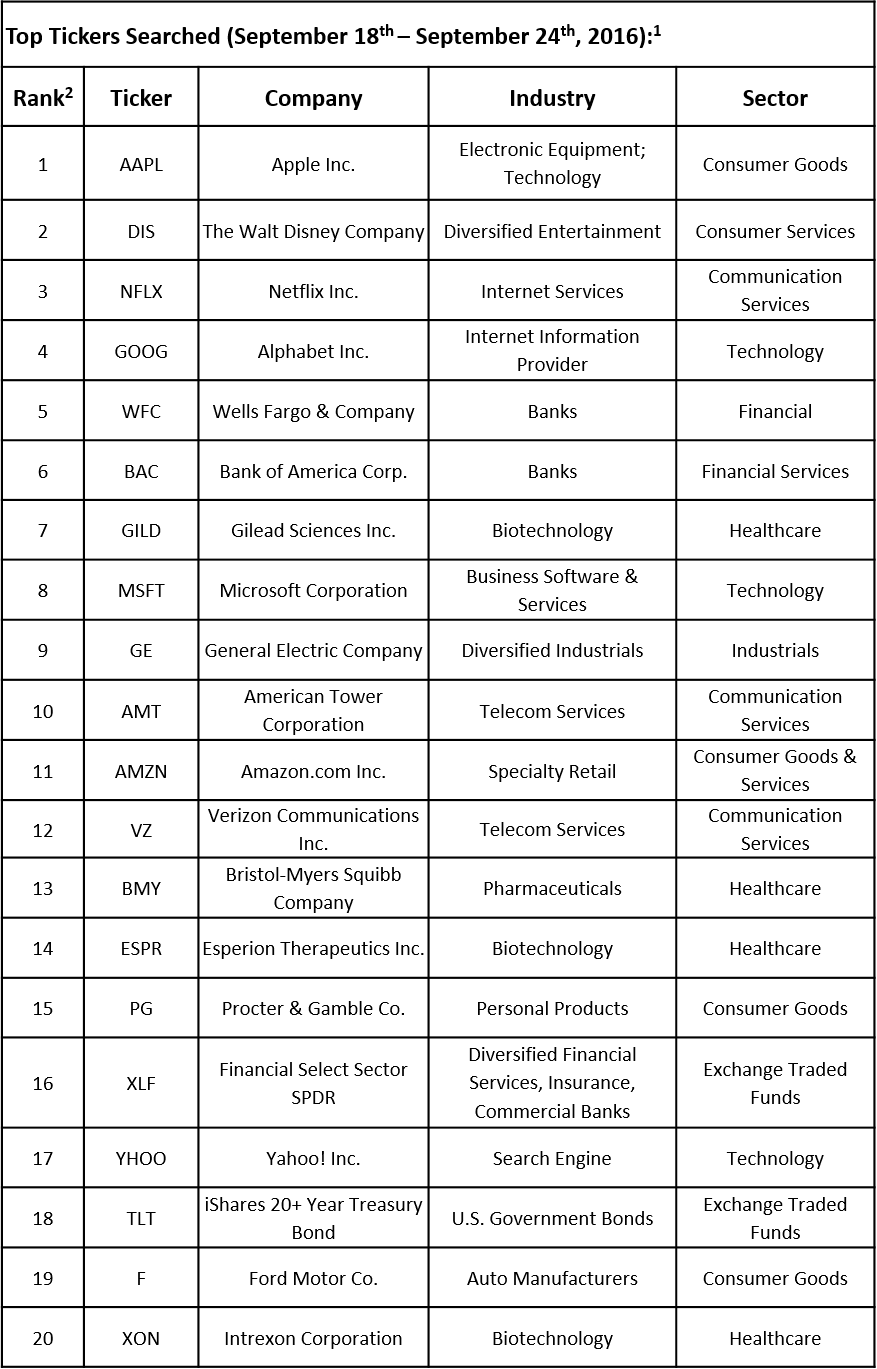 In this article let’s focus on Yahoo! Inc. (NASDAQ:YHOO), which on Thursday announced the biggest known hack into a company’s computer network. According to the company, two years ago, the account information of at least 500 million users was stolen by hackers. The information included names, email addresses, phone numbers, birth dates and hashed passwords. Yahoo said that the hack was a state-sponsored act, but it did not provide the name of the country involved.

Even though the US government and the public were outraged by the amount of stolen data, what was also shocking is how Yahoo handled the breach. The internet firm said that the breach was detected only this summer and the question remains why it was discovered so late. The New York Times has published a report exposing security problems at the company and questions emerged over CEO Marissa Mayer’s role in the data breach and the place of security on her list of priorities for Yahoo’s development. The company has yet to be investigated by the Securities and Exchange Commission after a request by Democratic Senator Mark Warner, who asked the SEC to check whether Yahoo complied with its obligation to inform investors and the public about the data breach. Six Democratic Senators sent a letter to Marissa Mayer earlier this week asking for details about the hack and the company’s actions to prevent further attacks.

The timing of this event is probably one of the worst for Yahoo since it is in process of being acquired by Verizon Communications, Inc. (NYSE:VZ), which agreed to buy its core internet assets for $4.83 billion. Now with the hack exposed and lawsuits being filed against Yahoo, the deal might grow into a bigger headache and the market is divided in its opinions whether Verizon should go through the acquisition as planned. Verizon has not commented on how the hack affects its plans, but it is conducting its own investigation into the matter. The prevailing opinion is that Verizon is not likely to cancel the transaction, but there is a high chance to renegotiate the price of the deal.

Revenues up Triple Digits in the Past 3 Years

Check Out This Bitesized Stock Pick