The fourth quarter is turning to be pretty eventful for the US, with the upcoming elections bringing up scandalous moments from the candidates’ past, with some even provoking disgust among both voters, politicians and experts. Hurricane Matthew raged across the Western Atlantic, last week affecting parts of Florida, Georgia, and North Carolina and taking 39 lives, although the damages are not as bad as they are in other regions, particularly Haiti, which was the most affected. The stock market also inched down in the first weeks of trading in October, dragged lower by some developments that transitioned from the previous month, such as the hack at Yahoo, fake accounts at Wells Fargo and Deutsche Bank’s settlement with the DoJ.

Last week alone, the S&P 500 edged down by 0.70% and Dow Jones Industrial Average inched 0.40% lower. Both indexes were affected by the release of the non-farm payroll data by the Bureau of Labor Statistics, which showed that the US added 156,000 jobs in September, lower than the expected 176,000 and below the August figure of 167,000. The unemployment rate inched up to 5%, compared to estimates of 4.9%, but economists consider that the numbers are not very surprising or disappointing and increased the odds of the Fed raising rates by the end of this year.

At the same time, financial advisors, seemed to be focusing on the earnings season, as revealed by the list of the 20 most searched tickers among financial advisors that has been compiled by TrackStar, the official newsletter of Investing Channel’s Intuition division. Alcoa Inc. (NYSE:AA), which was the first to release its third-quarter results on October 11, became the most popular ticker in the trading week between October 3 and October 7. It was followed by Bank of America Corp (NYSE:BAC) and Alphabet Inc. (NASDAQ:GOOG), the latter being in the spotlight in connection with the release of two new phones under its Pixel brand, as well as other products. Apple Inc. (NASDAQ:AAPL) slid down to the fourth position, the decline of financial advisors’ interest probably being attributed to the beginning of the earnings season and lack of important developments surrounding the company, although the issues with Samsung’s Galaxy Note 7 and its impact on the iPhone sales is something that shouldn’t be overlooked. 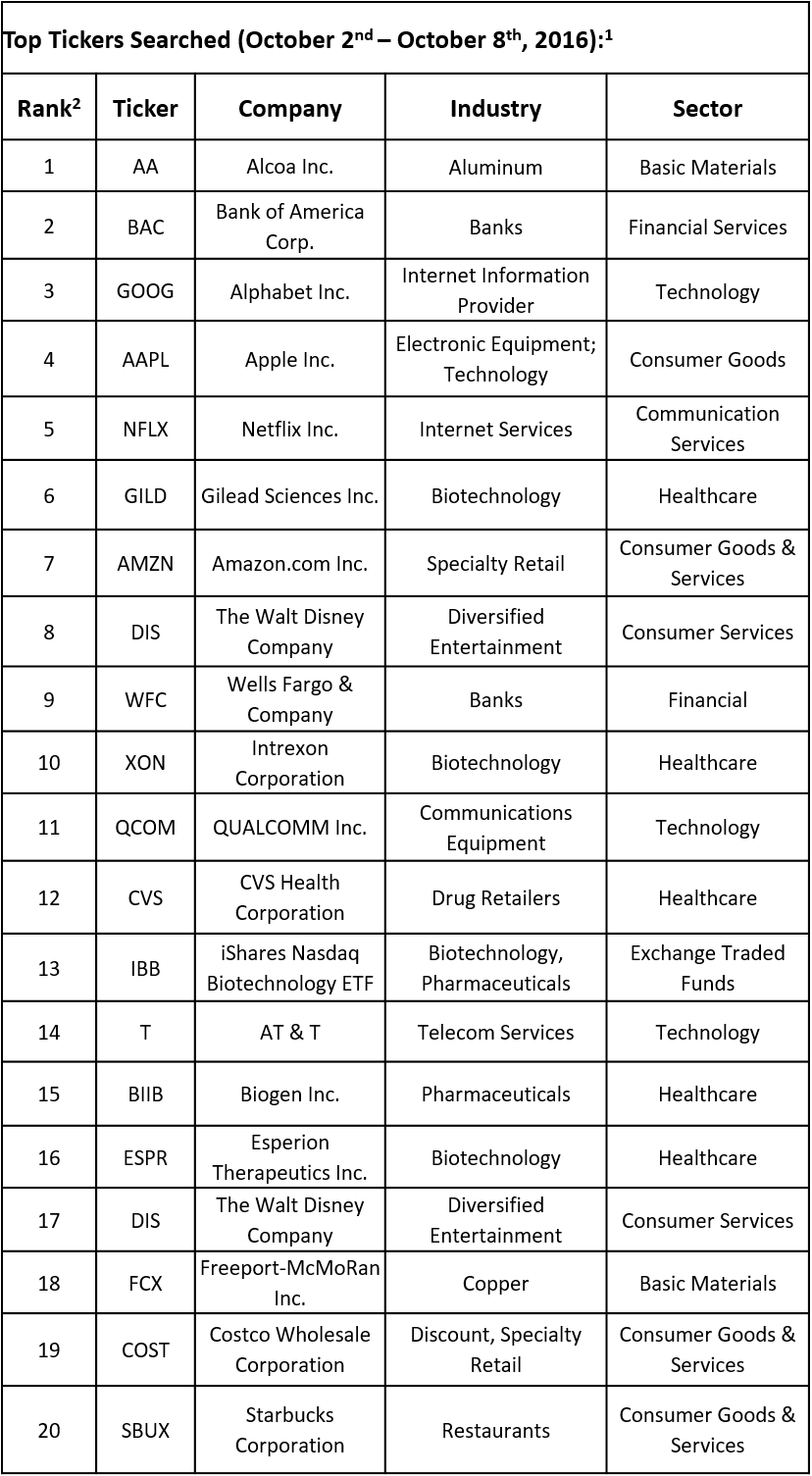 In this article, let’s take a closer look at Alcoa’s latest financial release, which, actually managed to slightly upset investors, being one of the catalysts behind the decline of the major indexes on Tuesday. Alcoa reported earnings of $0.32 per share, which were lower than the consensus estimate of $0.35, while revenue of $5.12 billion declined by 6.5% on the year and missed the expectations by $120 million. The results were hurt by lower alumina pricing and adjustments to delivery schedules in the aerospace industry.

The results were closely watched mainly because it’s the last report that Alcoa issues as a single company. On November 1, it plans to split into two entities, Arconic and Alcoa. The parent company will be renamed Arconic and will retain the aerospace, automotive, and transportation businesses, while its more traditionall refining, mining, and smelting segments will be incorporated into the spun-off company, Alcoa Corp. The units that will form Arconic posted a revenue of $3.40 billion, down by 1% on the quarter, while metals operations had a revenue of $2.3 billion, flat compared to the year-ago quarter. Alcoa also reduced the revenue forecast for the future Arconic units. For example, engineered Products division now expects revenue of $5.6-$5.8 billion from $5.9-$6.1 billion, while Transportation and Construction revenue target was revised to between $1.7 billion to $1.8 billion, from $2.1 billion.

The results put emphasis on the struggles that both companies will have to face after the separation. On the one hand, Arconic will have to deal with cyclicity in the aerospace and automotive segments, while Alcoa will continue its challenges caused by an oversupply of aluminum, mainly from China. Although in the second case, both presidential candidates have promised to support the local production of steel and aluminum.

The first Nobel Prize in music

TWTR Stock: The Only Reason Why No Bidder Will Step in to Arrest Twitter’s Fall