The US stock marked had a rough last week with both Dow Jones and S&P 500 declining by 0.50% and 0.96% respectively. The decline was mainly attributed to a disappointing start of the earnings season. The earnings are likely to determine the course of the market in the next weeks, although the upcoming elections will likely also have a say in where things are going. Investors are also looking forward to the start of the holiday season, which is expected to have a positive impact on retailers, although much of the gains are most likely already priced in. The release of the FOMC minutes last week also showed strong prospects of a rate hike in December and on Friday, Fed Chair Janet Yellen held a speech suggesting that the Fed may have to run a “high-pressure economy” in order to turn around the damages created by the last financial crisis.

TrackStar, the official newsletter of Investing Channel’s Intuition division, has compiled its weekly list of the 20 most searched tickers among financial advisors, which showed that the tech sector was the most watched, with six companies making the list, including Apple Inc. (NASDAQ:AAPL), which regained its position at the top. On the other hand, healthcare registered an increase in popularity with a total of five companies featured in TrackStar’s ranking, compared to three companies a week earlier. Moreover, Bristol-Myers Squibb Company (NYSE:BMY) jumped several spots and was the second most-watched stock among financial advisors. 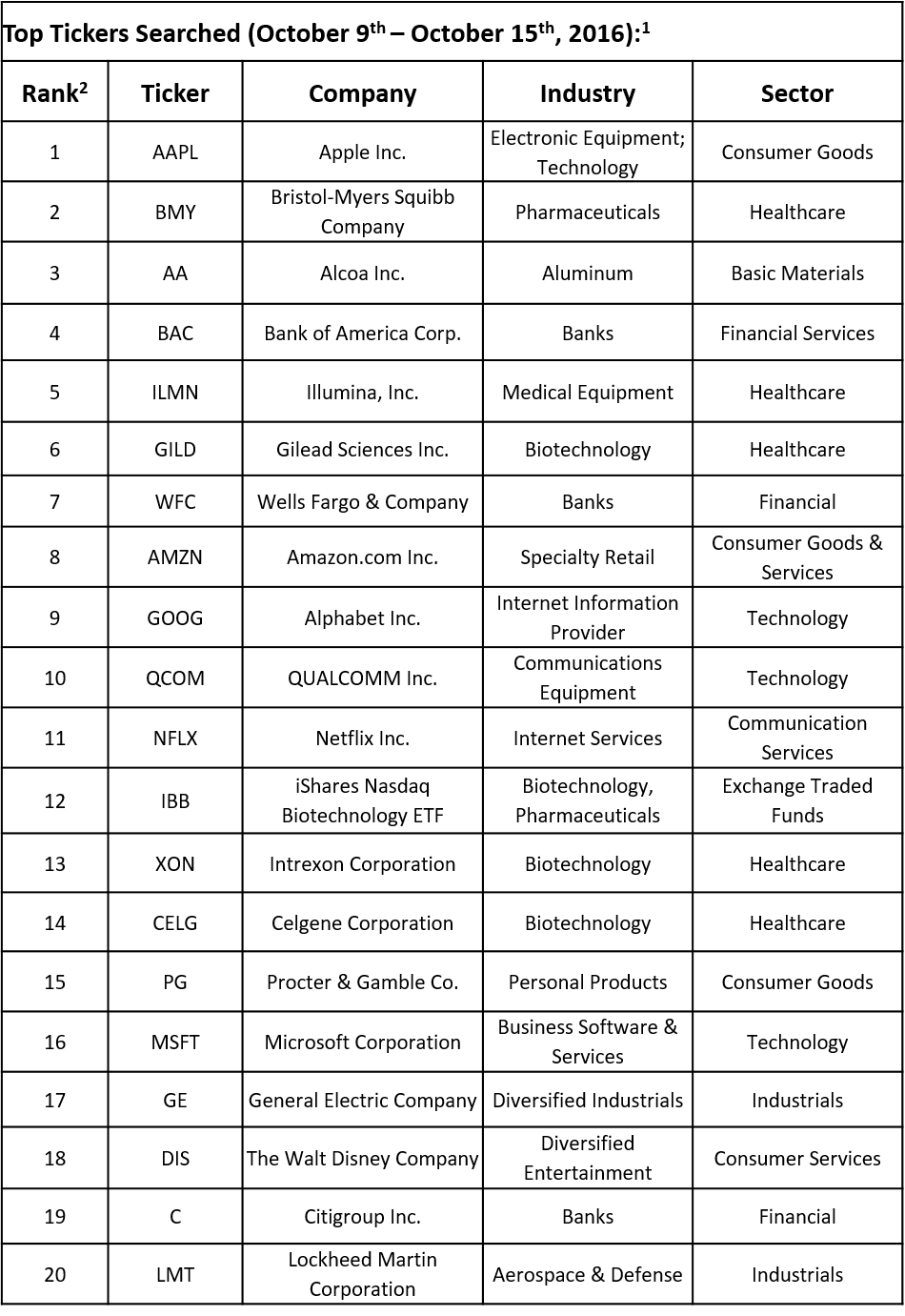 It’s not surprising that financial advisors took their attention to Bristol-Myers Squibb last week, since the stock plunged by more than 10%, the main hit being received on Monday. Investors have been bullish on Bristol-Myers mainly because of its cancer drug Opdivo, which has been leading the market and was trailed by Keytruda, a drug developed my Merck. However, on October 9, the company said that a phase 3 study, CheckMate-026, assessing the efficiency of Opdivo in patients with non-small cell lung cancer failed to show a survival improvement compared to chemo. This is the second failure of Opdivo since August, when the company said that Opdivo also didn’t show significant improvement in progression-free survival compared to chemo in patients with previously untreated advanced non-small cell lung cancer. The stock slid by $30 billion back in August and with the Monday drop it fell to a two-year low. On the other hand, Merck’s drug showed a reduction in death in patients by 40% compared to chemo in a similar study presented in June.

Two disappointments in a row showed that investors were premature to bet on Bristol-Myers as a winner in the new immune-oncology space. It’s not all bad news though, since Opdivo is still expected to generate strong sales in the areas where it was already approved, although it may need to get in the lung-cancer market as well to convince investors to stay. Analysts expected that Opdivo will generate around $10 billion in revenue by 2021, but they are likely to review their forecasts now.
On October 13, Goldman Sachs removed Bristol-Myers from its ‘Conviction Buy’ list and cut the price target to $67 from $75, citing disappointing Opdivo data. However, the analyst still has a ‘Buy’ rating on the stock and considers that Bristol-Myers is still very attractive for the long-run.

Due to a bearish run since August, Bristol-Myers’ stock has declined by more than 27% year-to-date. However, the decline also pushed the stock to trade at around 17 times forward earnings, which makes the company attractive at the current levels and most likely many investors took the decline as an opportunity to buy the stock, hoping that Bristol-Myers will still manage to conquer the lung-cancer market.

Here’s What the Shanghai Accord Means for the Dollar

Why Metaverse Stocks – Meta Platforms, Roblox – Are Alive and Well

Take Advantage of The Temporary Slump in the Energy Sector