The earnings season is in full swing, determining the trends that the indexes follow on a day-to-date basis. In this way, during the trading week between October 17 and October 21, the S&P 500 inched up by 0.38%, while Dow Jones advanced by 0.67 and NASDAQ appreciated by 0.83%. Last week, FactSet issued its “Earnings Insight” report, in which it stated that based on 23% of the S&P 500 companies that had reported their third-quarter earnings, 78% managed to beat the top-line estimates, while 65% posted better-than-expected revenues.

Several M&A deals that have been announced recently also had an impact on the stock market. With most experts considering that the Fed will hike the interest rates until the end of the year, some investors are worried about the impact it will have on the M&A activity. However, even if the rates are increased, they’ll still be low, which likely means that the M&A market is unlikely to cool down in the medium term.

However, financial advisors are mainly paying attention to the earnings, as can be seen from TrackStar’s analysis of the tickers searched by this group of market participants. The list of the 20 most-searched tickers compiled by TrackStar, the official newsletter of Investing Channel’s Intuition division, showed the tech sector dominating the list, as seven tickers were featured in the list, with the five ranking in the top 10. Moreover, Netflix Inc. (NASDAQ:NFLX) surged to the first spot as the company’s stock gained over 25% last week following better-than-expected results reported for the third quarter. Without any further ado, let’s dig in Netflix’s financial and stock-market performance. 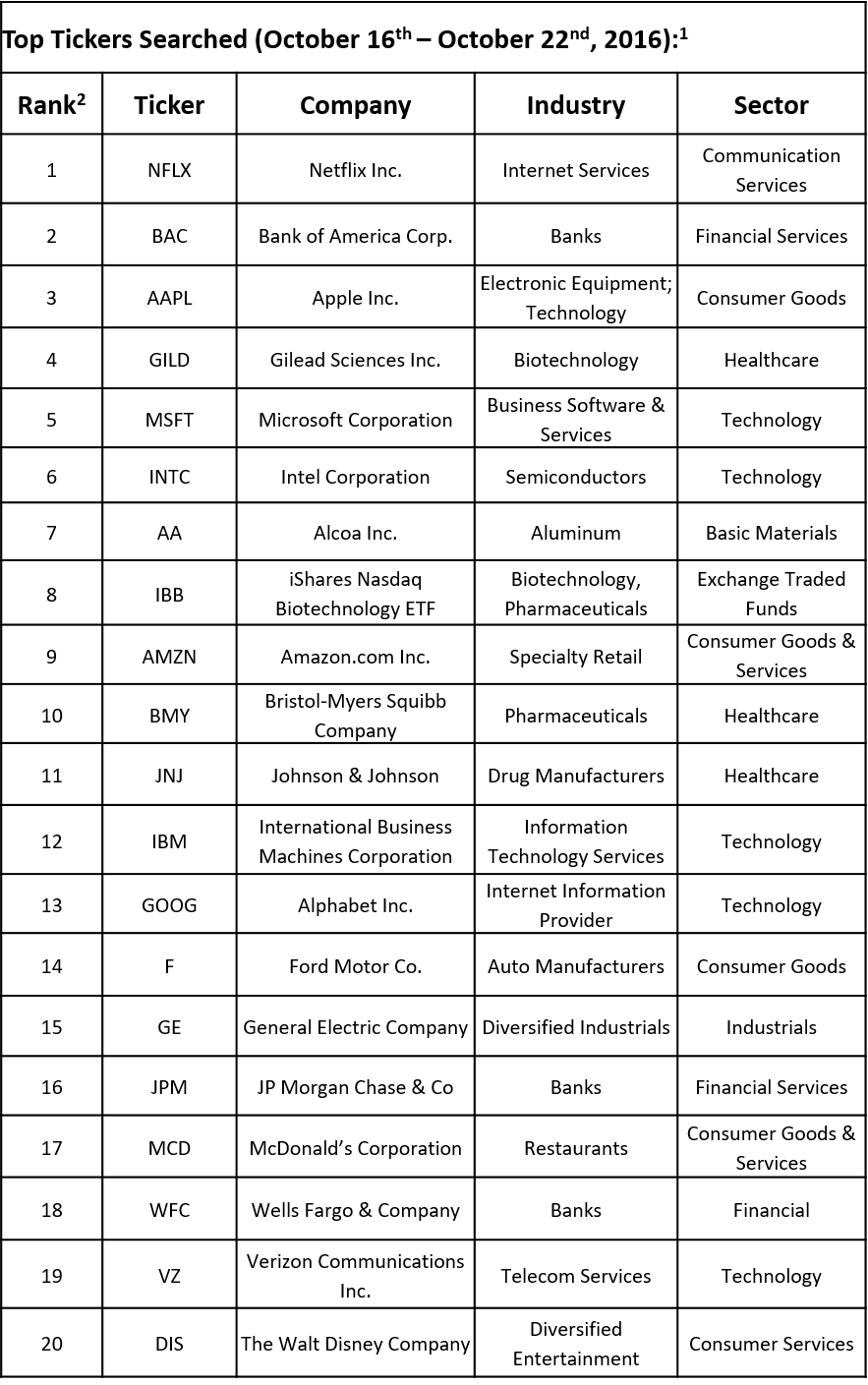 Netflix Inc. (NASDAQ:NFLX) reported its results on Monday, sending the stock over 20% higher in extended trading. The company posted EPS of $0.12 on revenue of $2.29 billion, versus the consensus estimates of earnings of $0.06 and revenue of $2.28 billion. The company’s revenue advanced by over 32% on the year helped by the success of its original series like Stranger Things, and the second season of Narcos. Netflix also said it expects EPS of $0.13 in the fourth quarter, higher than the consensus estimate of $0.06.

The number of subscribers, an important metric when it comes to Netflix, showed a net growth of 370,000 memberships in the US and 3.2 million internationally, which was higher than the expected aggregate increase of 2.3 million net memberships the company had predicted. Analysts had expected 309,000 US net new subscribers and 2.01 million international subscribers. The company currently forecasts a net increase of 5.2 million net subscribers in the fourth quarter, including 1.45 million in the US.
In a letter to shareholders, Netflix also provided an update about its attempts to conquer the market in China. Even though the country could potentially represent one of Netflix’s largest markets, the tough regulatory environment makes it difficult for the streaming company to tap into it. Netflix said it plans to license content to existing online service providers in China for now, but added that the revenue will be “modest” and it still intends to enter the market as a standalone service in the long run.

Following strong financial results, Netflix announced that it will offer $1.0 billion worth of senior notes due 2026 priced at 4.375%, having increased it from the previous principal amount of $800 million. Moody’s issued its report on the debt offering, rating it at B1 and saying that the offering will raise the company’s debt-to-EBITDA ratio to 9.5x – 10x range, which is higher than its 6.0x sustained leverage threshold for the B1 rating. However, the agency added that it expects the leverage to decline in the next two years due to the company’s “solid growth trajectory.” On the other hand, the debt raising shows that the management is committed to continue working on expanding on its original content, which is likely to further boost its revenue growth, despite the tough competition from the likes of Amazon Prime Video, which is expected to go global any time now.

The Paradox of Thrift

What You Missed This Week in EVs and Clean Energy

Housing: Inventory will Tell the Tale; Altos Research Reports Inventory Above Peak in 2021