First, as usual, housing economist Tom Lawler’s estimate was much closer to the NAR report than the consensus. So the decline in sales in August was no surprise for CR readers. 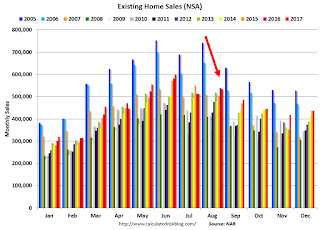 Sales NSA are now in the seasonally strong period (March through September).

Note: Existing home sales will be weak in the hurricane damaged areas in September.