Claims taking procedures in Puerto Rico and in the Virgin Islands have still not returned to normal.
emphasis added 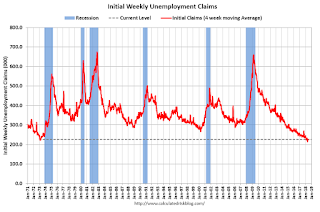 The dashed line on the graph is the current 4-week average. The four-week average of weekly unemployment claims increased to 225,500.

This was close to the consensus forecast. The low level of claims suggest few layoffs.

On The Fly: Pre-market Movers