I hope you had a fantastic long weekend. I’m excited for this morning’s opening bell after ending last week on a profitable note with a bullish position on Apple, which was my #1 TrackStar trade idea on May 18, 2020.

Today I’ve got my eyes on a stock within a sector which I can much more often than not get a hint of what “insiders” may know to be true and untrue, and as a result profit right alongside them.

The negative outcome of its vaccine testing resulted in an investigation by a law firm hired to ensure investor interests were not being violated.

In the initial hours of this investigation, nothing sinister was revealed about MRNA as a company. Rather, quite the contrary, actually.

Essentially, while MRNA’s first experimental vaccine proved to be ineffective, the company may be ready to test two more vaccines and an experimental treatment as early as this week – that’s a quick turnaround.

I see this as a bullish financial catalyst for MRNA itself, and I’ll be looking to make a move on it this week, maybe even today. 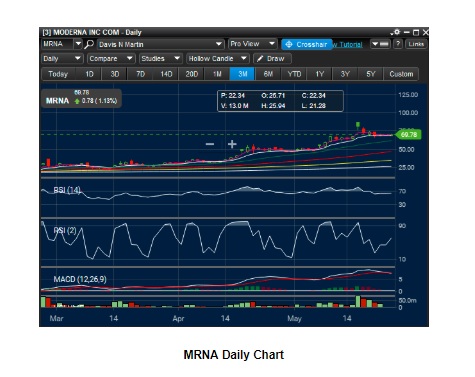 As you can see on the chart above, MRNA opened for trading this morning right above $69/share support. Above $69/share, and I’ll look for bullish activity on unusual options and within the dark pools and consider making a move myself.

Below $69/share, and I’d turn my stance on MRNA to short biased, especially if I see bearish unusual options and dark pools activity taking place.

With that said, what will likely move this stock the most is the outcome of the testing of its two additional experimental vaccines and its experimental treatment.

This is where I have a superior edge — many times it’s pretty easy to identify that Wall Street’s biggest players know something ahead of time, and I’m able to follow along with them…

In this case, I may simply be able to tell if MRNA’s vaccines and treatments will have successful initial testing, simply by following bullish or bearish money flow, which is hidden from most ordinary retail traders — Wall Street can be a greedy place!

In several previous trades with a potential COVID-19 cure being the highlighted catalyst, I’ve pocketed fantastic profits intraday or overnight as a result of my edge on markets which attempt to trade “in secret.”

Stay tuned for more information on my full trading strategy. I know you’re going to love it.

Let me know how you do today!