July 2020 will make a lasting impression in the history books for several reasons. For one, COVID-19 raged on, and the U.S. death toll from the virus topped 150,000. Violent protests erupted across cities following the death of George Floyd. Meanwhile, an estimated 25 million individuals were out of work and actively seeking employment.

Yet, despite the societal distress, most asset classes across financial markets posted gains in July. While the S&P 500 added 5.6%, the tech-heavy Nasdaq 100 outperformed with a 7.3% advance. Gold added 9%, and silver surged 30%. Even Treasuries moved higher, with the benchmark 10-Year Treasury adding .65% and its yield, which moves opposite to price, dipping to new lows.

In this edition of Advisors In Focus: TrackStar Insights, we review some of the exchange traded funds that drew the most interest (based on daily pageviews) last month. Using TrackStarIQ data, we also highlight some of the differences in engagement between retail investors and financial advisors. 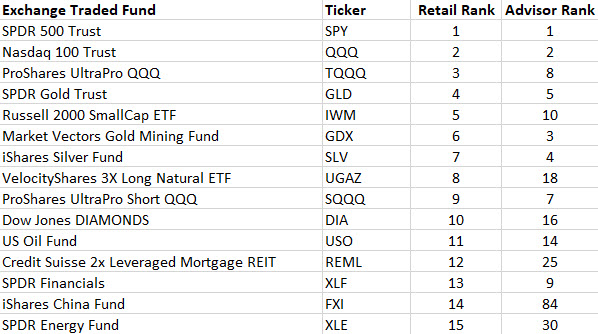 Meanwhile, financial advisors seem to share the same interest in the metals market lately, as (GDX), (SLV), and (GLD) are among the top five most viewed exchange traded funds by advisors, according to TrackStarIQ rankings. The group also showed interest in other sectors; iShares Biotech Fund (IBB), SPDR Financials (XLF), and SPDR Tech Fund (XLK) are among the top ten ETFs by pageviews in July. 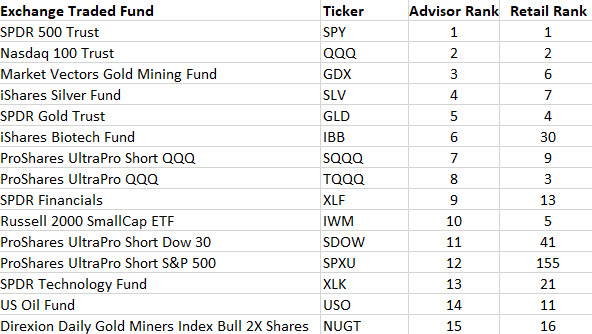 Increased interest in bearish-oriented funds from financial advisors isn’t surprising given the recent disconnect between what is happening on Main Street and Wall Street. Advisors are probably searching for tools to hedge and protect client portfolios should the stock market give back July gains during the sometimes volatile stretch from August through October.