A decade ago, a large cohort was moving into the 20 to 29 year old age group (a key age group for renters) and I was very positive on apartments. In 2010, we started discussing the turnaround for apartments. Then, in January 2011, I attended the NMHC Apartment Strategies Conference in Palm Springs, and the atmosphere was very positive.

Now a large cohort is moving into the 30 to 39 age group (a key for ownership).

Note: Household formation would be a better measure than population, but reliable data for households is released with a long lag. 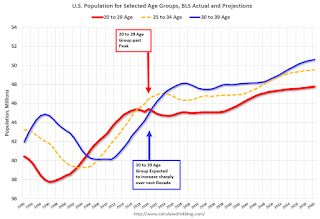 We can see the surge in the 20 to 29 age group (red).  Once this group exceeded the peak in earlier periods, there was an increase in apartment construction.  This age group peaked in 2018 / 2019 (until the 2030s), and the 25 to 34 age group (orange, dashed) will peak around 2023.  This suggests demand for apartments will soften somewhat.

For buying, the 30 to 39 age group (blue) is important (note: see Demographics and Behavior for some reasons for changing behavior).  The population in this age group is increasing, and will increase significantly over the next decade.

This demographics is now positive for home buying, and this is a key reason I expect single family housing starts to continue to increase.

Note: Based on Lawler’s work, I expect some downward revisions to the prime population following the 2020 Census (lower immigration, more prime age deaths). But the general story will remain the same.

Markets & Minds: Are We Heading for a Second Lockdown?