Economic activity in the fourth quarter is dependent on the impact of the pandemic. With the number of new cases per day of COVID approaching 200,000, hospitalizations at record levels (over 100,000), and deaths per day at new record highs, it is likely that economic activity will slow in December.

Economic activity was solid in October, and that would suggest PCE growth of close to 6% in Q4, even if November and December see no month-over-month growth.  No one expects a lockdown like at the end of March and in April, but it is possible that activity slowed in November and will decline in December.

The high level of uncertainty over the next few months makes forecasting extremely difficult. The automated approaches (below) do not capture this uncertainty.

From the NY Fed Nowcasting Report

And from the Altanta Fed: GDPNow

It is also important to note that GDP is reported at a seasonally adjusted annual rate (SAAR).  A 3.3% annualized increase in Q4 GDP (close to Goldman’s forecast), is about 0.8% QoQ, and would leave real GDP down about 2.7% from Q4 2019.

The following graph illustrates this decline. 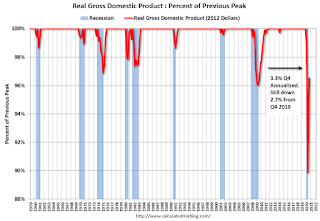 The black arrow shows what a 3.3% annualized increase in real GDP would look like in Q4.

Some Investors Are Sitting On Massive Losses

Is USDT The Next Stablecoin To Blow Up?

Bond ETFs Back In Favour

Humacyte downgraded to Underweight from Overweight at Piper Sandler