Note: This is as of December 27th.

From the MBA: Share of Mortgage Loans in Forbearance Remains Flat at 5.53%

The Mortgage Bankers Association’s (MBA) latest Forbearance and Call Volume Survey revealed that the total number of loans now in forbearance remained unchanged relative to the prior week at 5.53% as of December 27, 2020. According to MBA’s estimate, 2.7 million homeowners are in forbearance plans.
…
The share of loans in forbearance remained relatively unchanged in the final two weeks of 2020, maintaining the trend of hovering around 5.5 percent for the last two months. However, the share for Ginnie Mae loans continues to inch up and is now at its highest level since the week of November 1st,” said Mike Fratantoni, MBA’s Senior Vice President and Chief Economist. “Forbearance requests and exits both slowed markedly, and servicer call volume dropped sharply over the holidays.”

Fratantoni continued, “While the increasing number of COVID-19 cases continues to slow economic activity, the passed stimulus legislation should provide financial support for many households as the vaccine rollout commences.”
emphasis added 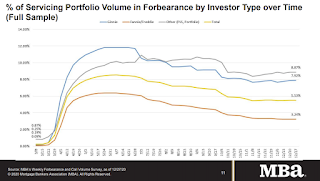 This graph shows the percent of portfolio in forbearance by investor type over time.  Most of the increase was in late March and early April, and has generally been trending down.

The MBA notes: “Total weekly forbearance requests as a percent of servicing portfolio volume (#) decreased relative to the prior week from 0.10% to 0.06%, the lowest level since the week ending March 15.”