A few excerpts from an article by Matthew Graham at MortgageNewsDaily: Time to Wake Up To The New Mortgage Rate Reality

There’s no precedent for the winning streak enjoyed by mortgage rates in the 2nd half of 2020. We’ve never seen so many new record lows in the same year, and we never spent as much time at those lows (not even close). All of the above makes it easy to get lulled into a false sense of low-rate security, but it’s time to wake up.
…
Following the Georgia senate election, we’ve been tracking a surge in bond market volatility based on the expectation that it would increasingly spill over to the mortgage rate world.

As of this week, that spillover arrived in grand fashion with many lenders quoting rates that are as much as three eighths of a point higher than they were last week. That means if you were looking at something in the 2.75% neighborhood on Friday, it could be 3.125% today…. 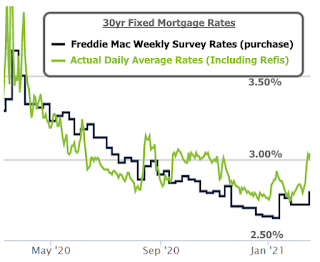 “But wait… I heard that mortgage rates are still really low and that they only went up a tiny amount this week!”

If you’ve heard that rates only rose slightly, it may have to do with headlines quoting Freddie Mac’s weekly survey. While that survey is accurate over time, it doesn’t capture short-term volatility. It also tends to stop measuring most of any given week’s volatility on Monday, and Monday was a holiday! As such, it’s lagging the reality on the street.

CR Note: Rates are still historically very low, however we will likely see a slowdown in refinance activity. Purchase activity will likely remain strong (rising rates sometimes pushes people to buy since they don’t want to miss out). The best case scenario for the economy (pandemic ending, etc), could lead to a slowdown for housing for two reasons: higher mortgage rates, and more inventory (from record lows).