This does not include the 133,319 initial claims for Pandemic Unemployment Assistance (PUA) that was up from 131,721 the previous week. 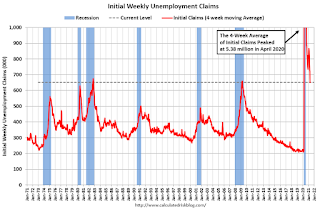 The dashed line on the graph is the current 4-week average. The four-week average of weekly unemployment claims decreased to 651,000.

Weekly claims were much lower than the consensus forecast.

U.S. Pledges To Cut Greenhouse Gas Emissions In Half By 2030