This gives a total of 5.01% delinquent or in foreclosure.

Today, the Data & Analytics division of Black Knight, Inc. released its latest Mortgage Monitor Report, based upon the company’s industry-leading mortgage, real estate and public records datasets. This month’s report looks at the continued, unprecedented levels of home price growth, and the impact that growth is having on mortgage lending and borrower behavior. According to Black Knight Data & Analytics President Ben Graboske, home price appreciation continues to break records, with ramifications that stretch across the real estate and mortgage markets.

“Indeed, the rate of growth has been accelerating by more than 2% in each of the past two months, and May’s 2.1% rise marked the sharpest monthly jump on record. Single-family home prices are up more than 18% from last May – also a record. And the growth has been widespread – home price appreciation accelerated in each of the nation’s 100 largest metros in May, with even the slowest appreciating metro area now seeing at least 10% annual growth. Data from our Collateral Analytics Group suggests even further acceleration may be on tap, as the median sales price of single-family homes in the first three weeks of June was already up 25% year-over-year.
emphasis added 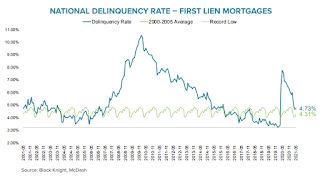 • It is expected that delinquencies will continue to slowly normalize through the remainder of Q2 and into Q3, though full normalization will likely take longer still

• Early-stage delinquencies (30 or 60 days past due) rose by 110K in May, while the number of seriously delinquent mortgages (90+ days but not yet in foreclosure) improved for the ninth consecutive month 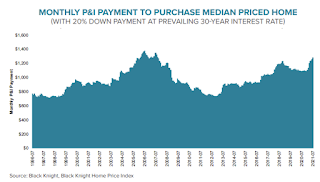 And on monthly payments (affordability) from Black Knight:

• Skyrocketing prices are beginning to take a toll on affordability; it now requires $191 (+18%) more in monthly P&I payments to purchase the average priced home than it did at the start of the year

• Factoring income into the equation, it now requires 21.3% of the median household income to make the monthly payment on the average priced home purchase assuming a 20% down payment

• Even with the average 30-year interest rate hovering at just over 3%, that payment-to-income ratio is up from 18.1% at the beginning of 2021

• In areas like Los Angeles, the ratio has climbed as high as 46.5%, an unsettling number for buyers hoping to make the leap into homeownership

Where can Levi’s grow?