On Friday at 8:30 AM ET, the BLS will release the employment report for September. The consensus is for 250,000 jobs added, and for the unemployment rate to be unchanged at 3.7%. 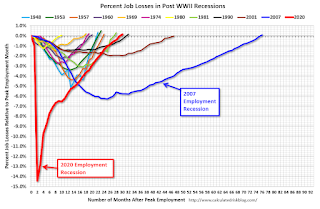 • First, as of August there are 240 thousand more jobs than in February 2020 (the month before the pandemic).

This graph shows the job losses from the start of the employment recession, in percentage terms.  As of August 2022, all of the jobs have returned.

This doesn’t include the preliminary benchmark revision that showed there were 462 thousand more jobs than originally reported in March 2022.

• ADP Report: The ADP employment report showed 208,000 private sector jobs were added in September.  This is the second release of ADP’s new methodology, and this suggests job gains inline with consensus expectations.

• ISM Surveys: Note that the ISM services are diffusion indexes based on the number of firms hiring (not the number of hires).  The ISM® manufacturing employment index decreased in September to 48.7%, down from 54.2% last month.   This would suggest 25,000 jobs lost in manufacturing.

Combined, the ISM surveys suggest 130,000 jobs added in September (below the consensus forecast).

• IMPORTANT: Usually in September, about 1.2 million educators are hired as the school year starts in some areas. This is seasonally adjusted to around 0 (since it is expected). It is unclear if that many will be hired this year – with the overall tight labor market – and this could distort the headline number.

• Conclusion: The consensus is for job growth to slow to 250,000 jobs added in September.  The ADP report was in line with expectations, and weekly claims were positive.  However, it seems likely that education will disappoint seasonally adjusted, so I expect the headline jobs number to be at or below the consensus forecast.
previous post

“For many [home] sellers, it likely feels like the rug has been pulled out from underneath them”