There seems to be one hot topic nowadays which is that 2022 has similarities with 2008. If this is the case, then the market should be preparing its next leg lower. A few followers and members reached out with this concern in recent weeks. Time to add a few data points to our no stock market crash in 2023 article as it looks there is more evidence required for our followers and members. The data points included in this article make us conclude that the market will not move lower even if the market feels ugly right now. This is one of the recurring conclusions in our 2023 forecasts, consistent with the insights from the 100 year Dow Jones chart.

We look at 2 chart comparisons, 3 fundamental data points and one anecdotal data point in this article. We conclude that things feel bad but aren’t factually bad (on the contrary, in fact).

In 2008, there was a structural breakdown of a key horizontal level, it happened in September of 2008 when 123 points in SPY ETF gave up. The bounce that occurred in August from that level was very weak, the triple bottom did not hold.

In 2022, the bounce from the double bottom at 360 points is pretty strong.

If anything, small caps are the market segment to lead the market lower. There is no way that small caps will hold strong if the market is bearish, on the contrary.

In 2008, Russell 2000 index was trading in a very narrow range before it brake down and went down fast in Sept/Oct of that year.

In 2022, we can see that the Russell 2000 has established a strong double bottom after it gave up support at 2101 points back in January and May.

When a bear market is about to pick up in speed, it will be visible in the credit market.

A yield spread is the ultimate proof of more pain ahead.

At present day, spread between the high-yield corporate bond composite and the 10-year US Treasury has widened from 279bps at the start of this year to 499bps recently. However, it isn’t spiking higher the way it did during previous credit crunches. 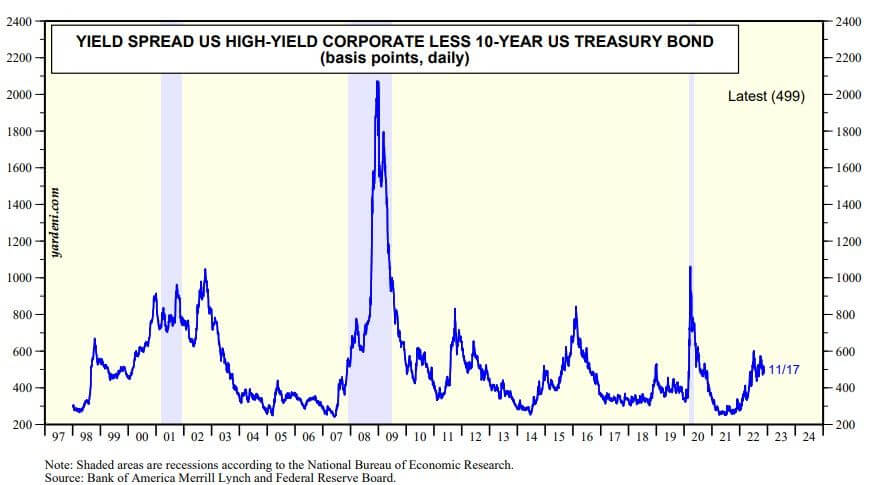 Consumer Sentiment sits at low levels. However, even if consumers remain depressed, emotionally, it does not translate into their shopping behavior. It’s quite the opposite in fact, consumers continue shopping as evidenced by the retail sales chart. 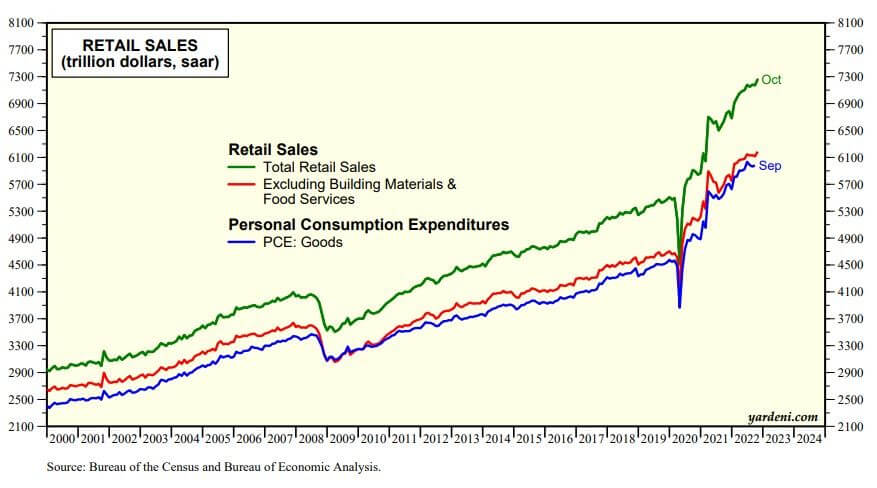 What this really means is that, once risk appetite returns, those massive amounts of U.S. Dollars will make it into the market (from cash to risk assets).

Anecdotally, we see that Barron’s published a U.S. Dollar cover right on Oct 10th: The U.S. Dollar Is Superstrong. How to Invest Now.

They have a track record of hitting turning points.

The green arrow on the USD chart (below) shows when Barron’s cover was published.

Can you imagine what happens if those US Dollars, accumulated throughout the entire year 2022, by global investors, flow into stocks and bonds?

Based on the current data at hand, it looks like stocks are not going to start a new leg lower, to push SPX to 3000 or 2000 points.

Invalidation: if the USD continues to rise past 119 points, consumer spending crashes, a credit crunch starts, SPX gives up 3500-3600 points. None of all this is in the charts right now.

This article was originally hosted at Investing Haven
previous post

Silver: A Divergence Of Epic And Historic Proportions

15 Biggest Banks In The World