Nuclear energy has its positives and negatives.

In terms of its positives, nuclear energy is very reliable and zero carbon. According to the Office of Nuclear Energy, nuclear was the most reliable energy source in America in 2021 given nuclear power plants operated at full capacity more than 92% of the time. Given it doesn’t emit greenhouse gases, nuclear also provided half of America’s carbon free electricity in 2021.

Furthermore, the nuclear energy industry supports around half a million jobs in the U.S. and contributes $60 billion to American GDP each year. The industry helps U.S. national security and maintains American global leadership in the peaceful use of nuclear technologies.

Nuclear power plants also don’t need that much land in terms of the energy it generates as opposed to wind or solar. Emma Derr of the Nuclear Energy Institute writes, “Nuclear energy pairs perfectly with renewables such as wind and solar to create a reliable, clean energy system. It provides carbon-free, around-the-clock power to fill the gaps when the sun isn’t shining or the wind isn’t blowing. Nuclear also complements renewables because it generates more power with less land—31 times less than solar facilities and 173 times less than wind farms. Wind and solar farms are located where wind and sunlight are abundantly available and require sprawling amounts of land for turbines and panels, whereas nuclear energy is contained to nuclear power plants. A nuclear energy facility has a small area footprint, requiring about 1.3 square miles per 1,000 megawatts of energy.”

Leading Nations in the Peaceful Use of Nuclear Energy

Many of the leading nations in the world have adopted nuclear energy as part of its energy mix.

Nuclear energy in the United States, for example, helps power plants avoid emitting over 470 million metric tons of carbon annually, which is about the same as removing 100 million cars off the road.

Nuclear energy is also big in other countries such as France, where nuclear power accounts for the majority of the total electricity generated. Given the country’s substantial nuclear generation, France is one of the leading industrialized nations in terms of low carbon emissions per capita.

Nuclear fission energy will remain an essential part of the world’s energy mix in the next few decades.

Given the need to reduce carbon emissions, nuclear fission energy could remain useful for the next few decades until fusion energy eventually becomes economical.

In terms of fusion, which is also a nuclear process, experts are hoping that the technology will become economically viable sometime in the 2030’s. Given the immense technological challenges of nuclear fusion, however, scientists have a lot of work ahead of them and it’s not clear when the challenges will be solved. 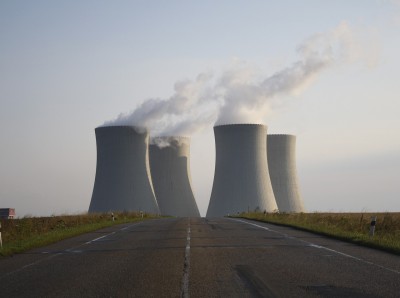 For our list of 18 Countries That Produce the Most Nuclear Energy, we used the IAEA’s nuclear share of electricity generation in 2021 list and we ranked them by TWh of nuclear production.

For those of you interested, also check out 12 Most Advanced Countries in Renewable Energy.

18 Countries That Produce the Most Nuclear Energy

Although it has a population of 8.7 million people, Switzerland is a major producer of nuclear power given the country’s nuclear production of 18.59 TWh across 4 nuclear reactors in 2021. With its nuclear production, nuclear accounts for around 36% of total electricity generated while hydropower accounts for around 52% of total electricity generated. In the future, however, Switzerland plans to eventually phase out nuclear in favor of other renewables.

The Czech Republic ranks #15 on our list of 18 Countries That Produce the Most Nuclear Energy given its nuclear production of 29.04 TWh across 6 reactors in 2021. Given its production, nuclear accounts for around one third of the country’s total electricity generation. For the future, the government plans to substantially increase nuclear capacity by 2040.

India is one of the fastest growing countries in the world whose energy needs are increasing every year. As a result, India’s government has committed to growing its nuclear power capacity to help meet its needs. The country’s nuclear power generation has more than doubled from 2000 to 39.76 TWh in 2021 and nuclear energy generation is expected to increase further in the future.

Belgium generated 47.96 TWh of nuclear power in 2021 or 52.4% of the country’s total electricity generated. Although nuclear is a big part of the country’s energy mix, Belgium originally had plans to withdraw from nuclear in 2025. Given the war in Ukraine, however, the country has since decided to continue to generate nuclear energy in two nuclear reactors for another 10 years.

Sweden ranks #11 on our list of 18 Countries That Produce the Most Nuclear Energy given it produced 51.43 TWh of nuclear power in 2021, which accounts for around 40% of the country’s electricity needs. For the future, Prime Minister Ulf Kristersson recently said the country is looking to potentially expand its nuclear power generation to offset Sweden’s reliance on renewables whose output can vary.

Given the country’s push for more renewables, Spain’s government is planning to phase out nuclear energy by 2035. Under its National Energy and Climate Plan 2021-2030, the Spanish government plans to gradually decommission nuclear power capacity to 3GW at the end of the decade as renewable energy costs continue to decline and as grid technology improves. As of 2021, Spain nevertheless generated 54.22 TWh of nuclear power, accounting for 21% of electricity generation.

Given it has to import much of its energy needs, nuclear energy has been a strategic priority for Japan’s government since the 1973, and up until 2011, nuclear generated 30% of the country’s electricity. Given the Fukushima nuclear disaster in 2011, however, public sentiment in the country shifted and Japan’s government is now planning for nuclear to account for 20% to 22% of the country’s electricity by the end of the decade. In 2021, Japan generated 61.3 TWh of energy from the nuclear reactors that have gained approval to restart.

Before 2011, nuclear was a big part of Germany’s energy mix with nuclear energy accounting for around one quarter of the nation’s electricity generated. After the Fukushima nuclear disaster in Japan, however, Germany’s government has reduced the country’s reliance on nuclear. In 2021, the country generated 65.44 TWh of nuclear power and in 2022, nuclear supplied around 6% of Germany’s electricity.

Canada produced 86.78 TWh of nuclear energy in 2021, supplying about 15% of the country’s electricity needs. In addition to being one of the largest producers of nuclear energy, Canada is also a leader in nuclear power technology and uranium exports. Given its resources, Canada has the third largest uranium reserves globally and the country is the world’s second largest exporter of uranium.

Click to continue reading and see 5 Countries That Produce the Most Nuclear Energy.

Disclosure: None. 18 Countries That Produce the Most Nuclear Energy is originally published on Insider Monkey.

15 Stocks That Have Increased Their Dividends for Over 25 Years

Bed Bath & Beyond Defaults On Credit Line And Warns Of Bankruptcy