Commenting on the Flash China Manufacturing PMI survey, Hongbin Qu, Chief Economist, China & Co-Head of Asian Economic Research at HSBC said:
“China’s manufacturing growth has started to stabilise on the back of modest improvements of new business and output. This is mainly driven by the initial filtering through of recent fine-tuning measures and companies’ restocking activities, despite the continuous external weakness. We expect further filtering-through, which is likely to deliver some upside surprises to China’s growth in the coming months.” 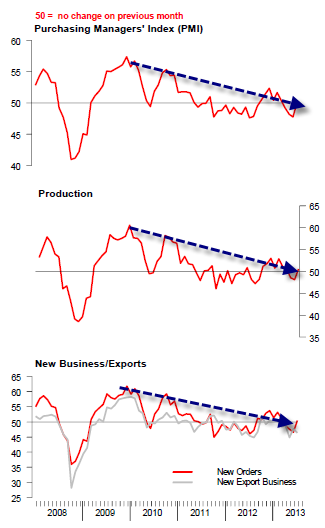 Since Mid-2009 the trend is pretty clear. Bounces have been weak, but so have the declines. Since 2011, more time has been spent in negative rather than positive territory on the PMI, on production, and on new business.
Hongbin Qu sees “upside surprises to China’s growth in the coming months“.
I suggest the coming months are iffy (at best). More importantly, surprises over the next few years to a decade will be to the downside.
Most economists cannot see beyond their own nose. Rebalancing is going to knock more off China’s growth than most can possibly imagine.
Not Just China
The struggle for growth same applies to nearly every country on the planet for a multitude of reasons