Following a 2.1% decline in junk bonds, the most since 2013, BlackRock and Morgan Stanley say yields are enticing.

Apparently there is never supposed to be a decline ever because with that trivial decline, Wall Street Declares All Clear for Junk Bonds.

It’s time to get the junk-bond party going again.

Morgan Stanley (MS) to BlackRock Inc. (BLK) say it’s time to buy after yields on high-yield, high-risk securities rose to the highest in a year on Sept. 29, resulting in losses not seen since the mid-2013, Federal Reserve-induced taper tantrum.

“We now see risk/reward as more attractive than it has been in over a year,” Morgan Stanley analysts Adam Richmond and Jeff Fong wrote in a report today titled “Buy High Yield.” While junk-bond buyers seemed sanguine about risk earlier in the year as the market soared, “we no longer see the same complacency among investors in aggregate.”

After Fed officials bemoaned the $1.3 trillion market for showing “reach-for-yield” behavior earlier this year, investors have been souring on the notes that posted annualized returns of 18.6 percent since 2009. The notes lost 2.1 percent in September, the most since a 2.6 percent slump in June 2013, according to Bank of America Merrill Lynch index data.

“High-yield has widened out and increased in attractiveness,” Jeffrey Rosenberg, the chief investment strategist for fixed-income at New York-based BlackRock, said in an interview today with Bloomberg Television.

Perspective on “All Clear”

Let’s put a bit of perspective on the “All Clear” signal using the Barlclays high yield fund (JNK) as a proxy for attractiveness, complacency, value, and risk in junk bonds. 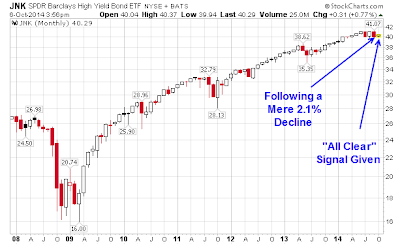 I am relieved to know that things are “all clear” and it’s “time to get the junk-bond party going again“.

I am wondering though, since March of 2009, when did the party ever end?

Key Questions of the Day

Either way, the answer isn’t pretty.