A few moments ago a reader who was having difficulty with an ad on my blog. I occasionally get complaints, and most of the recent ones involve non-US ads. The reader said the problem went away when he switched over to Chrome from Internet Explorer.

That got me wondering what browsers people were using to read my blog. Here are the results from a 20-minute, mid-Saturday snip. 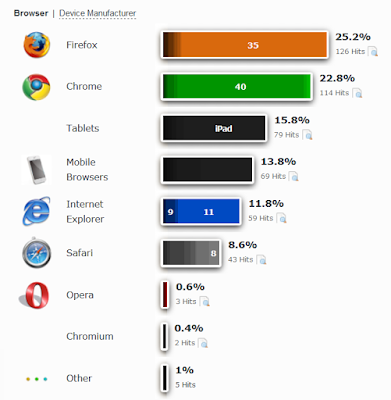 The above is publicly available on Stat-Counter which tracks my traffic.

If you wish to take a look, click on the “View My Stats” button (not the number) at the bottom of this page.

Since inception I have had over 102 million hits (the number shown).

I switched over to Stat-Counter from SiteMeter long ago, for numerous problems that I still see people complaining about. Stat-Counter keeps track of all kinds of things as does Google Analytics.

Search engine traffic (if someone found by blog via a search rather than a bookmark) looks like this. 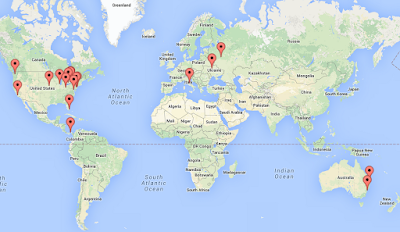 I did a search for the term “browser war” and discovered this December 19, 2014 ZDNet article: Did the browser wars finally end in 2014?

Google took over in 2008, introducing its Chrome browser, which caught up with Firefox by 2012.

Over the past decade, a lot has changed: Mobile devices now outnumber traditional PCs, and the desktop browser has become much less important than mobile web clients and apps. Apple’s mobile Safari and Google’s Chrome are now major players, Mozilla is in a time of major transition, and Microsoft is still paying for its past sins with Internet Explorer.

And in 2014, all those players seem to have dug in to well-entrenched positions. Here’s an end-of-year status report for each one.

Google Chrome: On a Path to World Domination

Google, it turns out, would love to have the dominant market share that Internet Explorer did back in its heyday, without the performance and security nightmares associated with IE.

The company is using a move straight out of the Microsoft playbook from the 1990s, using its dominant free services (Google Search, Gmail, and YouTube, in particular) to push the Chrome browser, and adding capabilities that require Chrome apps, which are designed to create the same type of lock-in that Microsoft’s ActiveX enforced in the early days of the Web, minus the horrible security flaws.

If that screenshot reminds you of “Best viewed in Internet Explorer 6,” you’re not alone.

The strategy seems to be working. While other browsers are remaining flat or declining in share, Chrome is still ascending, albeit more slowly. According to Net Applications, Chrome was in use on 20.6 percent of desktop and notebook PCs and Macs at the end of 2014, up from 16.4 percent at the beginning of the year. At StatCounter, which measures usage, Chrome crossed the 50 percent mark this year and now accounts for more web-based activity than Internet Explorer and Firefox combined.

Microsoft’s biggest problem at this point is maintaining compatibility with older IE versions that don’t hew to modern standards. This year the company announced plans to drop support for all but the latest version of Internet Explorer, a policy that would bring it into parity with most of its rivals. The trouble is, that policy doesn’t take effect until January 2016.

Meanwhile, Internet Explorer is still despised by developers, who rightfully resent having to build in hacks for all those old but still supported versions. Despite the fact that recent versions of Internet Explorer are remarkably standards-compliant, there are still sites that don’t work properly in IE, usually because whoever built the site designed it to run on Chrome or Safari and didn’t even bother testing it with Internet Explorer.

That Google deal expired in November. As the clock ticked down, Mozilla announced a new five-year (U.S.-only) search partnership with Yahoo but pointedly resisted specifying its terms. A look at Mozilla’s balance sheet raises questions about its long-term prospects, especially as it tries to move aggressively into the mobile sector with its own Firefox OS.

It hasn’t been a great year for Mozilla. In March, Firefox Vice President Johnathan Nightingale publicly threw in the towel on a long and expensive development effort to build a touch-capable Firefox for the Windows 8 Metro interface. That same month, co-founder Brendan Eich became CEO but lasted less than two weeks before resigning over a controversial political donation.

In the beginning, Safari was introduced on the Mac as a way for Apple to break its dependence on Internet Explorer.

And Safari is actually being used on those mobile devices. Yes, there are third-party browsers (including Chrome) in the App Store, but they’re forced to use the Safari rendering and JavaScript engines, which means Apple has complete control over the web browsing experience.

For several months this year I’ve used Opera as my default desktop browser. The experiment was designed to see whether an independent alternative based on the Webkit rendering engine could succeed.

Overall, it hasn’t been a completely unsuccessful experiment. There’s a lot to like in the new Opera, although a few key features, including the ability to sync bookmarks and passwords, are still missing. More importantly, some sites that were designed to work best with Chrome or Safari fail in mysterious ways in Opera. The failure rate is worse than with Internet Explorer 11, in my experience.

Unfortunately, the most messed-up pages are those I see when I try to use Opera to visit ZDNet. In particular, our new commenting system is almost impossible to use with Opera. That means I either have to use another browser or … stop reading comments. Decisions, decisions.

It’s pretty clear to see where this is headed. Firefox has some major issues. Opera is not in the picture at all, and Microsoft is headed that way.

Why Gold Is Looking Lustrous Once Again