Employment sank the ISM index in January which could muster no better than a 48.2 for what, following annual revisions to 2015, is the fourth sub-50 reading in a row. This is by far the worst run for this closely watched indicator since the Great Recession days of 2009.

Employment fell a very steep 2.1 points to 45.9 to signal significant contraction for manufacturing payrolls in Friday’s employment report, which however would not be much of a surprise given the sector’s prior payroll contraction. This is the third sub-50 reading for employment of the last four months and the lowest reading since, once again, 2009.

There is good news in the report and that’s a snapback for new orders, to 51.5 for only the second plus 50 reading of the last five months and which points to overall improvement in the coming reports. But backlog orders, at only 43.0, remain in deep contraction, and what strength there is in orders isn’t coming from exports which are in contraction for the seventh of the last eight months. Manufacturers have been working down backlogs to keep production up, which came in at 50.2 to signal fractional monthly growth. Inventories remain steady and low but the sample still say they are too high, sentiment that points to lack of confidence in the business outlook.

Confirming the weakness is breadth among industries with 10 reporting composite contraction against eight reporting monthly growth. If it wasn’t for strength in new orders, January’s data would be almost entirely negative. This report is a downbeat opening to 2016 which follows a definitively downbeat year for the factory sector in 2015. 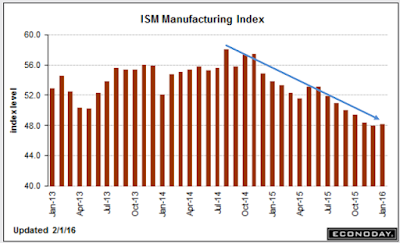 Let’s further dive into the numbers straight from the ISM Report.

In December I stated “There’s nothing in the ISM report to make the Fed want to hike, but the Fed will do what they want.

The Fed did indeed hike. And economists still believe no recession is coming.