The US stock market ended in the green the last week of the third quarter with the S&P 500 up by 0.17% and Dow Jones gaining 0.26%. Among the catalysts behind the appreciation is the boost registered by oil prices in the second half of the week, on the back of OPEC countries reaching a deal to limit production output at its meeting on November 30. The countries agreed to limit production between 32.5 million and 33 million barrels per day and will decide on the production levels for each member country during the November policy meeting.

Meanwhile, investors are bracing for a new round of earnings and analysts expect that overall S&P 500 third-quarter earnings will inch down slightly, pushed lower by bottom-line declines among oil companies, but lifted by increases in materials, healthcare and technology sectors.

TrackStar, the official newsletter of Investing Channel’s Intuition division, has compiled its weekly ranking of the 20 most searched tickers among financial advisors. Tech sector maintained one of the most watched, with six companies ranking in the list, including Apple Inc. (NASDAQ:AAPL), which maintained its top position. Netflix Inc. (NASDAQ:NFLX) climbed to the second spot, which can be attributed both to increased focus towards its original content plans as well as recent rumors about a possible acquisition, with The Walt Disney Co. (NYSE:DIS) said to be interested. Alcoa Inc. (NYSE:AA) also made the list on the ninth spot, as its board agreed to split the company in two, effective November 1. Another newcomer in TrackStar’s top-20 list is QUALCOMM Inc. (NASDAQ:QCOM), whose shares surged by more than 8% last week due to a jump on Thursday on the back of news from M&A space. 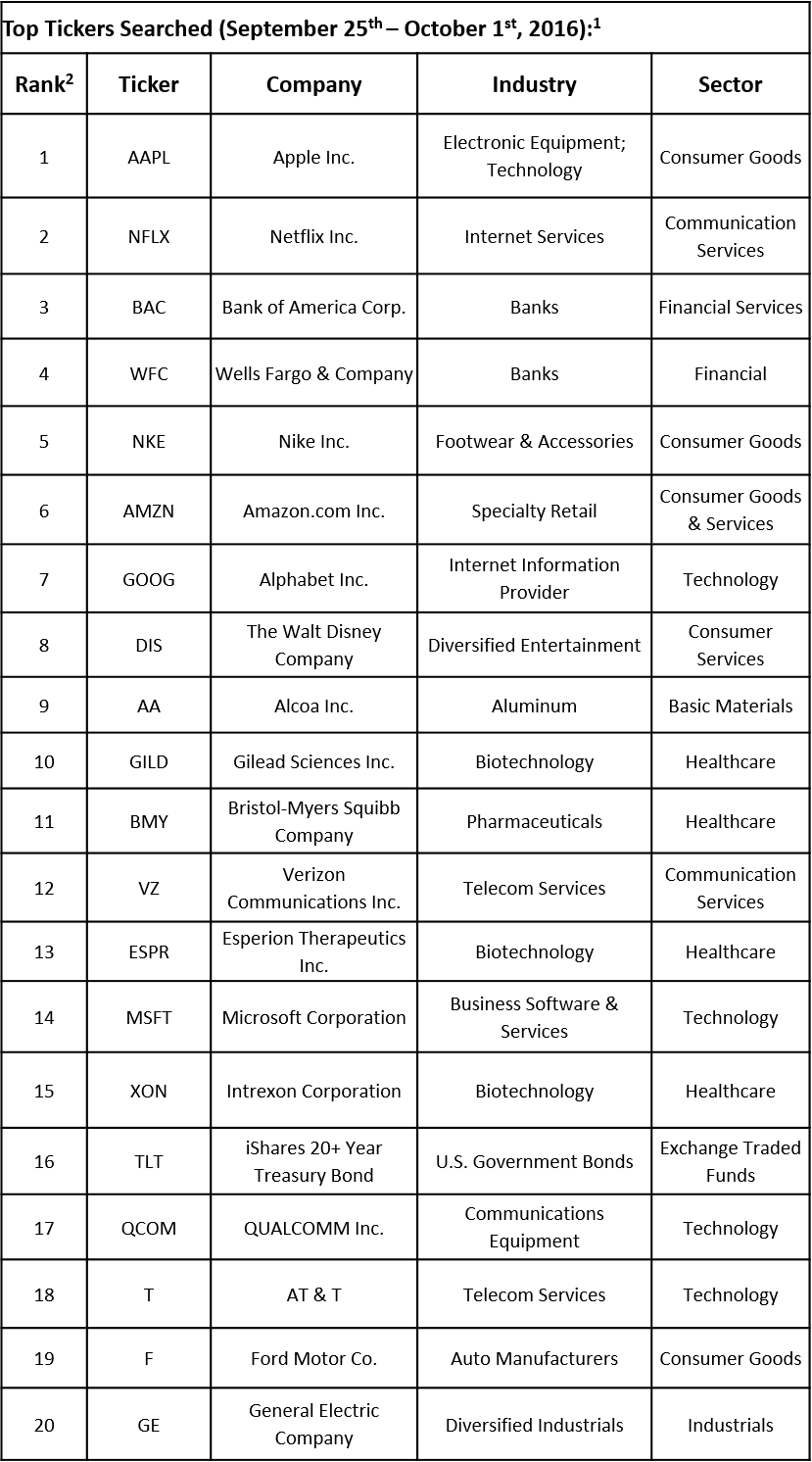 As the PC market has been struggling and the smartphone market approaches its saturation point, many semiconductor companies started to look towards acquisitions in order to boost their financials and consolidate the industry. Since the beginning of 2015, semiconductor manufacturers conducted M&A deals worth around $200 billion. Now, QUALCOMM seems to be heading the same direction as reports emerged last week that it may be interested in acquiring Dutch company NXP Semiconductors NV. Even though a deal was not officially announced and is expected in a couple of months, analysts estimate its value at around $30 billion.

Analysts started to weigh in on a potential merger of the two companies and while they agree that a deal would be beneficial in terms of reduced costs, increased efficiency and portfolio diversification, they also have concerns mainly related to NXP’s recent acquisition of Freescale semiconductors, which is still in the integration process. Sanford C. Bernstein estimated that the purchase of NXP Semiconductors would increase QUALCOMM’s bottom line by 30%, although they also stated that the company could face risks on the integration and execution side of the deal.

As QUALCOMM is currently known as one of the biggest suppliers of chips for the mobile industry, the acquisition of NXP will allow it to get into another market and one that is becoming increasingly popular – automotive. With NXP products in its portfolio, QUALCOMM will become one of the largest semiconductor suppliers for automobile producers, which are constantly improving technology to increase efficiency and to introduce new features, such as self-driving technology.

However, it should also be noted that after the reports stated that QUALCOMM is interested in NXP Semiconductors, other sources stated that other companies, including Intel, Texas Instruments, and Samsung, might also be interested. On the other hand, reports also suggest that QUALCOMM might look somewhere else if it doesn’t get NXP. Since NXP is a relatively small company, it is likely that it is interested in being acquired, the question is who will be the buyer, although most are still betting on QUALCOMM.

Most Exciting IPO At The Moment? GitLab

How Plug Power Is Planning to Become A Hot Stock