Major hurricane Matthew might cause severe damage on the east coast of Florida over the next couple of days.

At 1100 AM EDT (1500 UTC), the eye of Hurricane Matthew was located near latitude 25.1 North, longitude 77.8 West. The eye is moving toward the northwest near 14 mph (22 km/h) between Andros Island and Nassau in the Bahamas. This general motion is expected to continue today with a turn toward the north-northwest tonight or early Friday. On the forecast track, Matthew should cross the northwestern Bahamas later today and move close to or over the east coast of the Florida peninsula through Friday night.

Reports form an Air Force plane indicate that the maximum sustained winds are near 140 mph (220 km/h) with higher gusts. Matthew is a category 4 hurricane on the Saffir-Simpson Hurricane Wind Scale. Some additional strengthening is possible, and Matthew should remain a Category 4 hurricane while it approaches the Florida coast.
emphasis added 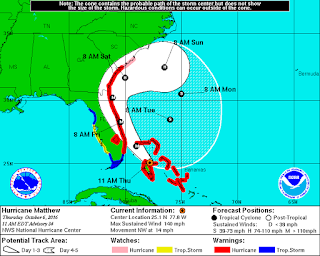 This image from the NHC shows the current forecast track for Hurricane Matthew.

The forecast track is for Matthew to rake the east coast of Florida and Georgia, and then – hopefully – turn out to the Atlantic.

Depending on the damage, we might see a spike in unemployment claims over the next few weeks related to the hurricane.

The following graph shows the 4-week moving average of weekly claims since 2000. 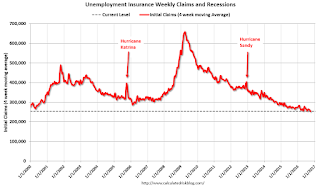 The dashed line on the graph is the current 4-week average.

Hopefully Matthew will not cause severe damage.

Did Revlon Put Lipstick on a Pig?